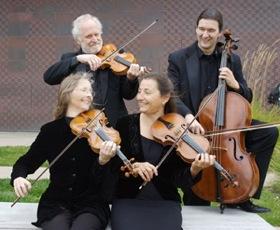 Having played all of Haydn’s string quartets for the last three years, the New Esterházy Quartet turned its attention this season to works by admirers and students of Haydn. On Friday, they played works by him, Mozart, and John Wikmanson, at St. Mark’s Parish Hall in Berkeley. The concert was the last in a series presented by Barefoot Chamber Concerts, an enterprise noted for both its quality and its informality, the eponymous feet belonging to gambists Peter Hallifax and Julie Jeffrey.

New Esterházy is the creation of people who have played together in many distinguished early-instrument groups. Their ensemble is tight, and strengthened by having two first violinists, Lisa Weiss and Kati Kyme, taking turns playing second. The concert began with Haydn’s Quartet in D, Op. 33, No. 6. It was a pleasure to hear it in the hands of players who have made their careers in playing Baroque music, built on strong bass lines supporting embellished upper parts. Haydn wrote a number of great moments for cello in this quartet, and William Skeen rose magnificently to the occasion. Kyme, the first violinist, played the highly embellished Finale with the same seemingly effortless panache that she exhibits in Philharmonia Baroque.

Mozart’s Quartet in B-flat, K. 428, dedicated to Haydn, was published just a year after Haydn’s Opus 33, when Haydn was 50 years old and Mozart 27. They enjoyed a mutual admiration society of two, and learned a great deal from each other. Both were expanding their compositional styles with these two quartets. Mozart’s is strikingly vocal. Lisa Weiss was in the first chair, and played the lovely melodies — with their extensive range and great leaps — like a fine Mozart soprano. Mozart passes little gestures from part to part, and is a genius at creating something wonderful with an economy of means.

Each part matters and each note matters. Kyme on second violin and Anthony Martin on viola got to sing too, and Skeen was in his element. The Adagio, beautifully written, was beautifully played.

John Wikmanson’s Quartet in D Minor, Op. 1, No. 1, written 20 years later, was dedicated to Haydn. According to Martin’s spoken program notes, Haydn was pleased at the dedication. But it didn’t get Wikmanson from Sweden to fame in London. The quartet is well-crafted, and abounds in entertaining theatrical effects: pregnant pauses, bits of dialogue between instruments in the Adagio, a sprightly Menuet, lots of notes in the Finale (some in pizzicato), and, toward the end, some interesting modulations, a unison outburst, and a final spray of pizzicato.

The Esterházys will be back next season with other offerings from Haydn’s admirers and pupils. Beethoven took some lessons from Haydn, so you’ll have a chance to find out whether he learned anything.