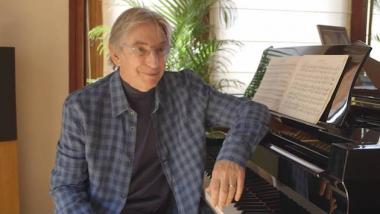 MTT Wears His Composer Hat in Meditations on Rilke

Here’s something that doesn’t come along very often at Davies Hall: Midway through Meditations on Rilke, the new Michael Tilson Thomas work that received its world premiere Thursday, January 9, a ready-for-prime-time hit song broke through.

It happened with a gorgeous setting of “ Immer wieder,” translated as “Again, Again,” the fourth of six Rilke poems in this dreamy cycle. Mezzo soprano Sasha Cooke had to wait her turn as the San Francisco Symphony, under the composer’s baton, spun out the orchestral opening, long enough to serve as a kind of mid-course interlude. A choice exchange for two cellos bloomed into a demurely sweeping melody, sweetly taken up by Mark Inouye’s singing trumpet. A piano cantered in, with John Wilson, indispensable throughout, at the keyboard.

By the time Cooke entered, the ingratiating melodies and translucent colors were comfortably nestled in. With her tender and pellucid voice, the singer made the most of her material, caressing the vocal lines and bringing the song to a gentle, fadeaway ending. Even on first hearing a listener could imagine all sorts of singers wanting to cover this ravishing tune. But then they’d need an orchestra, ideally one as good as San Francisco’s, to deliver the full effect.

As pleasurable as this was — you could sense a shared warmth passing through the audience — a misgiving about this section and the piece as a whole lingered. The darkness and deeper measure of Rilke’s poem, “the tiny churchyard with its names mourning” and the silent, terrifying “chasm” where others drop, were only lightly limned. For all its alluring aspects, from a Coplandesque expansiveness and theatrical flair to deft pointilist accompaniment and a touch of Mahlerian burlesque, these Meditations did thin out, only fitfully digging in over a nearly 40-minute running time.

While MTT’s intentions were certainly not modest, they were contained in and somewhat constrained by a nostalgic frame that informed these Meditations as a whole. In brief remarks from the podium, the conductor read and expanded on a passage, printed in the program, from a story his father told him. It involved a piano player, one with a taste for Schubert and Berg along with conventional fare, in a remote Western barroom in 1917.

Then MTT invited the audience to imagine what that might have sounded like. Wilson played a saloon-style riff on the piano. A muted trumpet sent out a wistful sigh. Gradually, as the strings spoke up, the sepia invocation took on color, as if a movie screen had gone from black-and-white to color.

Cooke was paired with bass-baritone Ryan McKinny (earnest but underwhelming) on the vocal parts. They took turns, each one humming a few bars in their first outings, and joined forces in one duet. The music, for both the singers and the orchestra, had an open-hearted, tonal, frankly American character, an odd but not unpleasing fit for the German-language poems. This, after all, was where the composer’s memory took root. Inspiration chooses the creator rather than the other way around.

The piece was originally billed as Rilke Songs. The new Rilke Meditations title is more apt, signaling the composer’s notion of reflecting on rather than tightly “reading” the lines musically. So in a sense, what was lacking wasn’t meant to be there in the first place. What was there, in abundance, were places for the orchestra’s musicians to shine. From the evening’s concertmaster, Nadya Tichman, to the chiming and clattering percussionists, the urgent woodwinds and mellow brasses, virtuoso instrumental voices kept standing out.

As MTT enters the final six months of his 25-year tenure as music director, that bond of maestro and his band was something else for the audience to meditate on. As a listener in Row G said of MTT during the applause, “I miss him already.”

Cooke returned after intermission to sing, in sterling fashion, four songs from Mahler’s Das Knaben Wunderhorn (The boy’s magic horn). Exhibiting her characteristic stage presence, she sang with vivacity, discretion, and an opalescent tone. Her standards were not quite matched by the orchestra, which seemed to lack its customary feel for the nuance and emotional currents of the composer’s scores.

The concert opened and closed with flashy showpieces. Berlioz’s Overture to Benvenuto Cellini blazed and whispered, spilling over with operatic eventfulness. A hymn-like brass chorus and a flurry of skittering strings brought it to a satisfying close.

Ravel’s La Valse took longer to find its gear — multiple, simultaneous gears — but when it did, the orchestra made this careening and deliciously chaotic work end the evening on a crash-course high.

Sasha Cooke and Ryan McKinny will sing with the orchestra.