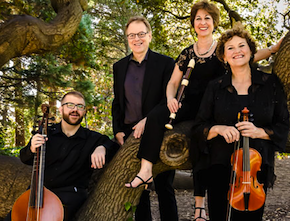 One of the cold ironies of early music, which academics have slapped with the label “Historically Informed Performance” (HIP), is that for every surviving Baroque instrumental work there are 10 surviving substantial vocal works — yet instrumental ensembles dominate the modern concert hall. This gives “HIP” audiences a skewed sense of the repertory. That Musica Pacifica invites collaboration with singers such as Rottsolk is a great idea, because vocal music is essential to the Baroque style. In another cruel irony, the greatest audience demand for vocal music occurs at the height of the flu and cold season.

Other than a waning of carrying power in the middle register and an occasional need for more intensity, I was hard-pressed to detect that Rottsolk was, in fact, nursing a cold. Her voice is lovely, especially in the crystal, laserlike, high lines that allow HIP sopranos to sparkle. Her singing is sufficiently resonant — “in the mask” (the cavities in the face that amplify your voice), as voice teachers like to say — to complement the instruments.

Although Rottsalk brought expressive power and easy coloratura to a minor Telemann cantata and a selection of Bach arias, she excelled in a set of French noels (carols), especially the balladlike “Un flambeau, Jeanette Isabella” (A torch, Jeanette Isabelle). It was pleasing to hear this tune in its original, gracefully filigreed form, rather than in one of dozens of clunky English choral arrangements rendering it as “Bring a Torch.” Likewise with the noel “À la venue de Noël” (At the coming of Christmas), which has somehow made its way into wheezy English hymnals as “Hear the prayer of all the penitents who keep this holy fast of Lent.”

In the wonderful Bach aria “Flösst mein Heiland,” from a cantata that is included in the Christmas Oratorio, violinist Elizabeth Blumenstock sang the offstage echo part herself in a pleasant, tuneful soprano. Rottsalk and Musica Pacifica also brought out its own selective arrangement of English carols, complemented with fife, drum, and extended techniques from gambist Josh Lee.

“Sweet was the song the Virgin sung” is a beautiful tune, justifying its place on a holiday program in any season. In an un-HIP gesture, the ensemble performed only three of the 11 verses of “Tomorrow shall be my dancing day” (which includes a controversial, anti-Semitic verse). Archives are filled with these strophic tunes containing countless verses, and I believe this flusters modern performers.

The ensemble’s arrangements were flexible and lively. I would have liked to hear more of this type of playful creativity, at which the ensemble excels. But the musicians occasionally turned to an “anything Christmas-y” approach to programming.

The ensemble’s arrangements were flexible and lively.Emblematic of the problem was the group’s decision to cancel a concerto titled Noël Allemand. As Judith Linsenberg explained, “We chose it because of its Christmas title, but it’s an awful piece and, after playing it through, we didn’t want to subject you to it.”

The Pastoral Symphony from Handel’s Messiah is beyond redemption from the taint of redundancy, and Vivaldi’s “La pastorella” concerto has nothing to do with the holidays (shepherdesses did not abide in that field), though this was an agile vehicle for recorder player Linsenberg’s rapid passagework.

Any musician who regularly performs sacred works becomes something of an armchair theologian. Violinist Elizabeth Blumenstock gave her own take on how this instrumental work somehow deals with the Annunciation, before launching into a somber, yet driven performance of “The Annunciation” from Heinrich Biber’s Mystery-Sonatas. (For purists, the Annunciation is in mid-March.) My thesaurus is running out of words for Blumenstock’s playing, so I’ll end by calling it, in a gross understatement, “very good.”