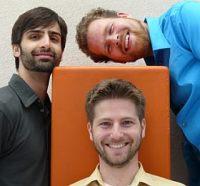 Be'eri Moalem on March 30, 2009
What are music stands and electric guitars doing on the same stage? Purple lights along with sheet music? T-shirts and blue jeans plus violins and violas? A better question might be: Why should this still come as a surprise? For the Switchboard Music Festival continues to combine various distinct musical genres, amassing them into a day of performances.

Jonathan Russell’s String Quartet (played by Graeme Jennings and Jory Fankuchen on violin; Charith Premawardhana on viola, and Erin Wang on cello) uses that traditional ensemble for music influenced by the rhythms and harmonies of modern progressive rock. The piece had elements of minimalism, but not the mercilessly repetitive kind. Alongside the idiomatic minimalist gestures, things such as dramatic twists and turns, intricate phased rhythms, and a poignant cello solo to fade out at the end kept the piece engaging and unique.

Held at a hole-in-the wall theater in the heart of San Francisco’s Mission District, the festival employed many local musicians, including some neighbors both in venue and in ideology: the members of Classical Revolution. In addition to the string quartet, they provided musicians for Ken Thomson’s Throw Back, a piece that alludes to Baroque conventions of moto perpetuo and concerto grosso but that sounds anything but Baroque, what with guitarist Brian Dowdy and violist Premawardhana rockin’ the solos, supported by a small orchestra of strings and a six-member “stick” ensemble tapping out energetic rhythms on the floor.

What’s enthusiastically named the Yes, Yes! Ensemble (Premawardhana on viola; Minna Choi on vocals, flute, and keyboards; and Michael Bello on tenor sax and percussion) played what was described as “a traditional railroad song” — what turned out to be a deeply beautiful and relaxing arrangement featuring dreamy synths, plus jazzy improvisation.

An interesting highlight of the festival featured Paul Dresher and Joel Davel on newly invented instruments: an electronic synthesizer and sound processor controlled by mallets (named the “Marimba Lumina”) and a 14-foot metallic contraption deemed the “Quadrachord” (a cross between an electric guitar, a bowed double bass, and a percussion instrument). Plenty of otherworldly electronic sounds were generated, and thundering rhythms kept the piece throttling forward with excitement. At specific moments, a relentless beat machine took over for quite a long time, and after a certain point I wanted to hear more than indulgence in the gimmick of having new instruments.

A few offerings on the program, such as Damon Waitkus’ Many Thousands of Airplanes and Max Stroffregen’s Outskirts of Bumtown, provided something akin to what you’d hear at a classical new-music concert: works that are quite abstract, are notated on paper, and require a conductor. Still, the presence of saxophones, electric guitars, and a drum set gave the pieces that nonclassical atypical edge that characterizes everything at Switchboard.

Some of the most joyously boisterous sounds of the festival came from two wind ensembles: the Zoyres Eastern European Wild Ferment (Jonathan Russell, clarinet and bass clarinet; Mike Perlmutter, saxophones; Liam Stakawicz, trombone; Josh Sirotiak, tuba; and Eddi Pollard, drums) and a quartet of bass clarinets (Jeff Anderle, Cornelius Boots, Aaron Novik, and Russell). The latter group performed lengthy sets from memory, producing a heavy yet agile sound that only such an unlikely gathering of instruments is capable of.

It was difficult to unplug the Switchboard, as everything was sounding great and I didn’t want to miss anything, but it was also hard to stay for everything. My limit before I need an intermission is about an hour’s worth of music, especially in a dark, stuffy room on a glorious San Francisco day. But the great thing about an eight-hour concert is that you can make your intermission as long as you want and feel free to visit one of the Mission’s many excellent dining offerings, walk through the area’s colorful mural-decorated streets and parks, and still have time to return for a few more hours of exciting new music.