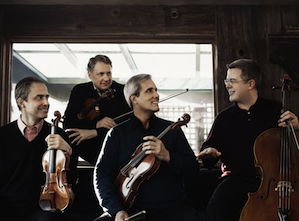 The Emerson Quartet is one of the last standing of the old-school American string quartets. They were around before period performance practice became mainstream — meaning they phrase and articulate Haydn quartets with almost the same intensity that they use in Shostakovich. The Emersons opened the [email protected] winter series at the Performing Arts Center, Menlo-Atherton, with strong playing, especially in a Mendelssohn quartet, in which nobody can compete with the group’s deep understanding of the music.

The program opened with Haydn’s Quartet Op. 20, No. 3 in G Minor. For much of it, Philip Setzer was pecking the spiccato (bouncing bow strokes) so harshly that much of Haydn’s elegance and humor was lost and the piece sounded grumpy. The intonation, however, was impeccable and the clarity of the articulation in all instruments was admirable, especially in a tricky figure for viola and second violin, which propels the first movement. The sheet music for this passage was printed in the program, which can be appreciated by different members of the audience on different levels — to see the actual notes that the musicians are looking at helps to connect listener with performer. [email protected]’s commitment to top notch program notes and education is exemplary.

Shostakovich’s late Quartet No. 14 in F-Sharp Major (Op. 142, 1973) was also tough and prickly but here appropriately so. The piece is practically a cello concerto, and served as a great introduction for the group’s new cellist, Paul Watkins, who took over from David Finckel (who is also the co-founder of [email protected]). Watkins was only six years old when the quartet was founded and must have grown up listening to the Emerson’s prolific recording output because he fits in seamlessly, while also injecting a fresh new energy. The slow movement duet between Watkins and Eugene Drucker on first violin was performed with resigned emotion — helpless, but still yearning.

A Friend Remembered in Music

Between the Haydn and Shostakovitch, Setzer talked about the darkness of the program — three heavy and serious minor-key pieces with moments of “glow” tucked into the slow movements. These special moments are most powerful in the context of the darkness. Sometimes it feels like the composers set up the stormy angry music specifically for this contrast, a descent in order to make an ascent possible. Setzer tied Mendelssohn’s F Minor Quartet, Op. 80, specifically the Adagio elegy to his sister Fanny Mendelssohn to the concert’s dedicatee, Boris Wolper, a close friend of the Emerson Quartet. He choked up and nearly cried talking about Wolper, who passed away this past July.

The short and heartfelt talk put Setzer in a vulnerable emotional space rarely shared on a classical concert stage and it brought out the best violin playing I have heard in years. He played so hard that he broke a string in the Shostakovich. In the Mendelssohn Adagio — especially the big crescendo that reaches a climax on a fortissimo chord, which dips in volume as if to take a breath only to strive for another climax in a heartbeat rhythm — that phrase elicited a total emotional breakdown. I was sobbing and I wasn’t the only one. If you give in, it is uncontrollable. I hadn’t felt that in a long time. This is the power of music.

Sharing a piece of great news, [email protected]’s executive director, Edward P. Sweeney, reported that the organization was firmly “in the black”. Not surprising in the country’s wealthiest zip code, yet still worth commending.