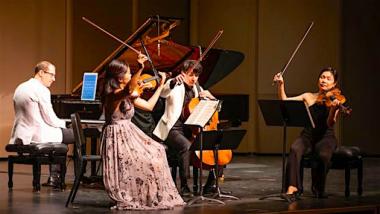 How did Stephen Sondheim and his Pacific Overtures enter the scene?

The time: Saturday evening. The place: [email protected], listening to the Adagio of Josef Suk’s Piano Quartet in A Minor, Op. 1, and pondering Sondheim’s statement on the relationship between the “big picture” and what is specific, tangible, of the moment:

It’s the fragment, not the day.
It’s the pebble, not the stream.
It’s the ripple, not the sea.
Not the building but the beam,
Not the garden but the stone,
Not the treaty house,
Someone in a tree.

How did that pop up?

Because against the gestalt of the unusual, brilliant program of “1890 – 1900: Moscow to Montmartre,” the pebble/fragment/ripple that mattered most at that moment was the Suk Adagio, as gorgeous piece of music as you will find in an Opus 1 anywhere outside the Mozart-Mendelssohn-Korngold kindergarten.

The source of the music is mindboggling: 17-year-old Suk, a student (and future son in law) of Antonin Dvořák at the Prague Conservatory. Judging by this and other works from the same period, a great prodigy.

The music is both enchantingly melodic and subtly anxious and anguished, reminiscent of Arnold Schoenberg’s much larger but definitely kindred Transfigured Night. Suk’s 1891 work was composed only eight years before Schoenberg’s seminal masterpiece.

That’s the decade for this program of the festival whose theme this year is “Incredible Decades,” tracing chamber music’s history in seven chapters, so all the evening’s performances were of the same period:

After the Suk, it was Debussy’s 1893 String Quartet, Op. 10, performed by the Schumann Quartet, Three Intermezzos from 1892 by Brahms with Gilbert Kalish, and Rachmaninoff’s 1893 Suite No. 1, Fantaisie-tableaux, with Wu Han and Vonsattel.

[email protected]’s program notes provide a pithy characterization of this important period in the history of music:

As the 20th century approached, German and Austrian dominance of Western music began to fade, giving way to a galaxy of voices from France, Russia, Bohemia, and beyond. The late music of Brahms, emblematic of German Romanticism, serves as an anchor in this program of music that spotlights a cosmopolitan collection of composers of the era.

While the Brahms, in Kalish’s measured, restrained performance, did indeed serve as an anchor, Suk, Debussy, and Rachmaninoff all pointed to the  opening of the 20th century, and one of the most exciting decades in the history of music. (That decade, unfortunately, is missing from the festival program; the next mainstage concert will deal with “1920–1930: The Roaring Twenties,” July 31.)

Even today, more than a century later, Debussy’s harmonies and rhythms sound “different” and hypnotically appealing. Composed just a year ahead of Prelude to the Afternoon of a Faun, the G Minor Quartet has many of the characteristics of the more famous work, although with a great dynamic range.

The concert ended not with a (Debussian) whisper, but with Rachmaninoff’s mighty 20-finger bang of what sounded like church bells accompanying the Russian liturgical “Christ Is Risen” chant, reflecting a poet’s inscription printed on the score:

Till all the booming air rocks like a sea,
As silver thunders carol forth the tidings,
Exulting in that holy victory.

Rachmaninoff’s Suite No. 1 for two pianos had a grand performance by Vonsattel and Wu Han, the festival co-founder and co-director taking her place upstage, behind the piano in front, even though her part was leading most of the time. Would that all piano virtuosos were as humble — but not self-effacing — and respectful of colleagues as Wu Han!