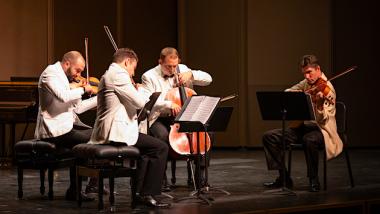 The 1820s had its turn last week as one of the “Incredible Decades” that are the theme of this year’s [email protected] chamber music festival. The program dubbed it the decade of the “Classical Twilight.” Not only was this approximately the time when music, lagging behind literature, traded in classicism for romanticism, but it was also the decade when both Beethoven and Schubert died. If they hadn’t — and they could easily not have, for Beethoven was just 56, Schubert only 31 — the musical history of the next few decades would have been quite different.

Both Beethoven and Schubert knew they were not long for this world, and — fitting Edward Said’s thesis of a “late style” in artists — this affected their music. There was one very late composition by each in the program that I heard at the Menlo-Atherton Center for Performing Arts on Sunday. From these, it’s obvious that the opportunity to have a final word affected each differently.

Unlike its epically-long and experimentally-shaped immediate predecessors, Beethoven’s final string quartet, Op. 135 in F Major, reverts to the customary four movements and the roughly 25-minute length of his earliest quartets. Instead of raging or mourning, it seems to be calm and accepting. In this performance, by the Escher String Quartet, geniality and relaxation were the predominant moods of the outer movements, even in places where such a framing might not be expected, as with the pizzicato section of the finale’s coda. When the music, in a typically Beethovenian way, gets more intense and declamatory, the players gave it in a civilized fashion, without roughness, and immediately melted back to calmness afterwards.

The central movements were more intense. The Lento is emotional and lyrical, though without the extreme passion of Op. 132’s “Heiliger Dankgesang.” The chordal passages of this movement, which are extensive, were ideally balanced between making a combined sound and letting each voice be heard individually. The Escher’s same talent for diverse unity was used in the Scherzo for striking mechanical sparks.

Schubert’s Winterreise (Winter journey), by virtue of its sheer length — over an hour — as well as the intensity of its feeling, has to be a leading candidate for the most morose song cycle ever written. Of its 24 songs, 16 are entirely or predominantly in the minor mode. The poems by Wilhelm Müller are a continuing series of evocations of lost love, and Schubert’s settings magnify this. The whole is supposed to form a monodrama, a coherent entity portraying the narrator’s state of mind, but there’s no narrative thread or emotional arc to support such a theory. It’s just a series of laments, awesome for its sheer implacability.

One might feel sorry for the baritone who undertakes singing such a project, but he knew the job was dangerous when he took it. At this concert, that baritone was Nikolay Borchev. Though he is of Russian origin, he has worked mostly in Germany and has a style I associate more with the latter country. His tone quality is hearty but lyric and smooth, somewhat reminiscent of that of Dietrich Fischer-Dieskau, Winterreise’s most famous exponent, except that Borchev is deeper and darker in his low notes. As with many singers oriented in that direction, he shows more strain in his high notes, though Schubert does not challenge him often in that direction. The music doesn’t give him much opportunity to vary his presentation, but he tried to convey in vocal expression and occasional gestures some of the verbal content. His most effective work came in the cold and careful way he treaded slowly through “Das Wirtshaus” (The inn). While the narrator may express weariness, Borchev was untiring throughout the entire slog.

Wu Han, Menlo’s co-artistic director, accompanied. Her frequent performances here are always a delight. Schubert put far more variety into his piano writing than he did in the vocal line, and Wu Han exploited this impressively. An almost Wagnerian expression of emotion in the accompaniment of “Erstarrung” (Numbness), a thundering evocation of “Erlkönig” in “Rückblick” (A look backward), and by contrast a delicate touch in “Gerfror’ne Tränen” (Frozen tears) and “Frühlingstraum” (Dream of spring), and pointed punctuation in “Auf dem Flusse” (On the river) and “Letzte Hoffnung” (Last hope) — plus being light and bouncy rather than heroic or thrusting in “Die Post” (The post) — were exemplary. This buoyancy gave a welcome variety to the program.

The concert’s prelude performance by the festival’s International Program Artists featured Mendelssohn’s Piano Trio No. 2 in C Minor, Op. 66, in a strikingly effective display of banked and reserved power, plus Dvořák’s rarely heard String Sextet in A Major, Op. 48. This was full of energetically played lines each going its own direction, giving this sextet the unusual effect of sounding like a string quartet that’s grown extra heads.

The Menlo-Atherton Center for Performing Arts has been good to the Menlo festival over the years, and it’s far superior to the other outside venues that Menlo employed in its early days, but this year may be its last appearance at the festival. With the intent of focusing its activities more tightly on the Menlo School campus, the festival has already embarked on constructing a new concert hall there with the intention of having it ready for next summer. While the CPA seats 492, the new hall, which will be behind Stent Family Hall, will seat 380. That will mean a tighter press for tickets (and parking) and more sold-out concerts at the festival, so concertgoers should be prepared.

The event, part of [email protected]’s Summer Festival, wasn’t exactly like hanging out with Schubert and friends in a Viennese salon in the 1800s, but it was close.

A concert by the Escher Quartet at Kohl Mansion offers solemn repertoire sandwiched between more cheerful music for a striking experiment in contrasts.