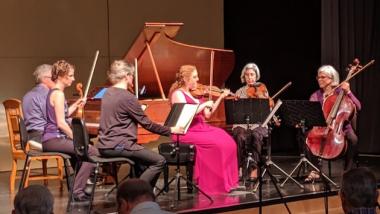 Ernest Chausson’s four-movement Concerto in D Major for Violin, Piano, and String Quartet (1891) is neither concerto nor sonata nor symphony, but it somehow manages to be all three, especially when played with fire and conviction by an accomplished soloist.

Those incendiary and emotional elements were on vivid display at the Valley of the Moon Festival on Sunday afternoon. Playing in the surprisingly good acoustics of the Hanna Boys Center auditorium in the town of Sonoma, soloist Rachel Barton Pine and five colleagues brought down the house with an inspired performance of Chausson’s rarely heard masterpiece.

The Chausson capped a program of works associated with the Franco-American salonierre Winnaretta Singer, an heiress to the Singer sewing machine fortune and a princess by marriage to Prince Edmond de Polignac. Her salon was at the center of Parisian cultural life at the turn of the 20th century, populated by Proust, Colette, Cocteau and a bevy of composers from Fauré to Stravinsky. Sylvia Kahan, author of a recent biography of Singer, introduced the program and gave valuable context for each piece.

After all the introductions, Pine rolled her wheelchair to the front of the stage and transferred to a piano bench. The quartet surrounded her like the string sections of an orchestra, and the piano loomed in the background, serving as winds, percussion, and brass.

As in a concerto, the orchestra stated the opening theme. Cellist Tanya Tomkins, the festival’s artistic director, took the lead, leaning forward and guiding the other strings, including violist Phyllis Kamrin and violinists Anna Presler and Liana Bérubé. Pianist Eric Zivian, the festival’s music director, blended well with the strings, aided by the crystalline tone of a Chickering grand, made around the same time as the concerto.

Chausson’s introduction is dramatic, marked by a recurring three-note motive and unison fortissimos. Pine increased the drama considerably when she entered, playing a soaring line on a Guarneri violin with gorgeous, full-bodied sound. She floated effortlessly up and down the fingerboard, her bowing a sight to behold. Her playing was entrancing, particularly at the end of the movement, where she ascended to a stratospheric high note with heartfelt intensity.

The second movement, marked Pas vite (not fast), centers on a simple melody that begs for resolution. Pine propelled the group forward, ratcheting up the tension until the tune finally resolved on another high note. The next movement, marked Grave (slow, serious), serves as the emotional center of the concerto. Playing with expressive vibrato and exquisite bowing, Pine unveiled a surpassingly beautiful melody with true legato and sustained intensity.

The transcendence of the third movement ultimately gave way to the infectious vivacity of the finale, marked Tres animé (very animated). Here Barton and Zivian played occasional sonata-like passages as the others stood by. Pine was compelling throughout, and Zivian stoked the fire. What started as a concerto ended up as a full-fledged opera, with the central character baring her soul to an adoring public. The applause was thunderous.

The rest of the program paled somewhat in comparison to the Chausson. The concert opened with tenor Kyle Stegall singing five Venetian melodies by Gabriel Fauré and the song cycle Venezia by Reynaldo Hahn, all accompanied by Zivian on piano.

Stegall has a refreshingly pure tone and strong control of vocal dynamics and facial expressions. He was most successful in the Fauré, which he had memorized, but less so in the Hahn, which he read mostly from the score. Playing from score is fine for instrumentalists, but it’s a problem for vocalists because it prevents them from fully engaging with the audience. In the Fauré, Stegall acted out the lyrics by waving his hands, molding his face, and grabbing the piano, among other gestures. In the Hahn, most of that fell away.

Admittedly, the rapid-fire Venetian dialect in the Hahn is tricky, but so are the French lyrics by Paul Verlaine in the Fauré. Stegall’s French was superb, with near-perfect articulation and pronunciation. His Italian was equally good, and it was remarkable to see how open-mouthed the Italian was, as opposed to the closed-mouth French. In the end, a little more memorizing on the Hahn would have gone a long way.

Princess Singer was an early fan of Wagner, so the program segued to one of his Wesendonck Lieder, originally a set of five songs for soprano and piano, with lyrics by the poet Mathilde Wesendonck. Not only was the vocal part transposed down to tenor, but the piano was replaced by a string quartet. The result was puzzling. Stegall’s German wasn’t nearly as good as his French and Italian, and he sometimes failed to articulate final syllables. Meanwhile, the string quartet did its best to imitate a piano, but an actual piano would have been a better candidate for the job.

The second half began with Stravinsky’s “Three Pieces for String Quartet,” a brief foray into chamber music composed the year after “The Rite of Spring.” The three pieces hint at the possibilities of a full-fledged string quartet, with some trademark driving rhythms and ostinatos, but the pieces are over so quickly that there isn’t much chance for development. In this concert, they mainly served to set the stage for the fully developed Chausson.

Valley of the Moon Music Festival focuses on the influential women who commissioned and promoted composers, from their homes.

Schoenberg on gut strings and a run of 19th-century composers, heard on instruments of their time.

Verve and Variety: It's Hard to Pin Down Rachel Barton Pine

Ever-curious and adventurous, violinist Rachel Barton Pine reunites with Michael Morgan, her former mentor, and the Sacramento Philharmonic to showcase a suite by African-American classical composer William Grant Still and a concerto by Sergei Prokofiev.