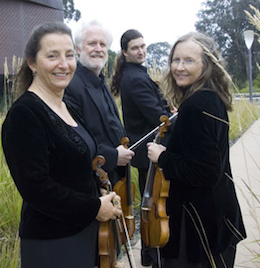 There’s a divide in the music of Joseph Haydn that came to the fore in the New Esterházy String Quartet’s Saturday concert, which opened the 39th season of Berkeley’s venerable Trinity Chamber Concerts series. In the modern concert hall, Haydn’s copious output skews toward the works he wrote for two concert tours in London late in his life, yet these very public late works contrast with much of the composer’s output as a liveried court employee. New Esterházy (consisting of Kati Kyme, Anthony Martin, William Skeen, and Lisa Weiss), joined by the ever-fantastic soprano Christine Brandes, brought out the best in these two faces of Haydn.

The uncredited influence behind Saturday’s program was Johann Peter Salomon (1745–1815), a German violinist who settled in London and imported artists from abroad in the manner of “composer residencies,” to use a favored buzzword among today’s orchestra managers. Salomon’s two Haydn tours in the 1790s were perhaps the most musically successful concert tours in the history of music. Haydn, who spent his entire life meeting the needs of patrons, knew how to deliver works appealing to a broader public. This is why, in contrast to his court operas, which are seldom heard today, Haydn’s London works endure as repertory staples.

Orchestras occasionally pull out Haydn’s cantata Scena di Berenice, a vehicle for exceptionally versatile and expressive sopranos, which Brandes and New Esterházy performed in a reduction by William Skeen. Brandes’ performance was (no surprise) superb. She drew on her wealth of experience in Baroque opera to bring out the tortured inner psychology of a woman confronting an untimely death. The work concludes with a celebrated “rage aria” that has delighted audiences since its premiere.

Christine Brandes as Good as They Come

It did not hurt that the soprano’s musicality was only exceeded by her vocalism. Skeen’s arrangement could not have been further from the original, yet it fit in with the tradition of the music. Salomon’s London orchestra numbered over 100 players, with 16 first violins and triple woodwinds. Modern orchestras might keep this in mind when trying to replicate the diminutive forces of period-instrument bands. Salomon, however, also arranged many of Haydn’s huge London symphonies for his own string quartet.

It’s easy to see why Haydn never orchestrated, and ultimately set aside, his 1789 cantata Arianna a Naxos (Ariadne on the Isle of Naxos). This work belongs to the “other” Haydn, and I suspect that the composer realized it would never work with a full orchestra nor appeal to a broader public. In this cantata, as in his operas, Haydn prefers densely contrapuntal yet ingenious accompanied recitative to flashy, set-piece arias. Many of his musical jokes are for an inside crowd, but the irony would be lost on a pop audience. Many sopranos and most orchestras get lost amid pages of recitative, yet Brandes and New Esterházy were the perfect match to mine Haydn’s deep thought for its wealth of riches.

Brandes and New Esterházy were the perfect match to mine Haydn’s deep thought for its wealth of riches.

New Esterházy was formed to perform all of Haydn’s string quartets, and anything good said about its earlier performances applied to the Saturday performances of two quartets in G, Op. 76, No. 1, and Op. 74, No. 3. The latter quartet was written for Solomon, and the Op. 76 quartet, Haydn’s penultimate, was informed by the composer’s London experiences. Characteristic of this quartet is the attention to detail and phrasing as well as a preference for letting the instruments resonate, especially Skeen’s cello. Even unison lines were broken up into microphrases, and any opportunity for contrast, such as the passive-aggressive minuet of Op. 76 or that quartet’s inexplicably cartoonish ending, were milked to excess by the players. A certain local classical radio station often omits slow movements from its broadcasts. In the full-bodied slow movement to Op. 74, New Esterházy was anything but boring.