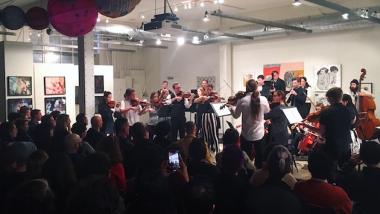 Especially when musicians have recently finished their conservatory studies, professional life often amounts to teaching, gigging, and finding creative ways to make ends meet. Six years ago, five friends from San Francisco Conservatory of Music — Sarah Bonomo, Georgeanne Banker, Emily Botel-Barnard, Sasha Launer, and Scott Padden — were determined to add a project of their own into this mix. So they created One Found Sound, a conductorless chamber orchestra consisting mostly of young professional artists. On Friday evening at Heron Arts, which is a gallery in San Francisco, the group performed “Divergence.” One Found Sound’s unique energy saturated this program of two contemporary works and one Mozart symphony.

I arrived early, and members of the orchestra welcomed me in. They even encouraged me to grab a drink from the event’s open bar. From this warm welcome to the chic venue to the musicians’ sartorial choices — they put a twist on the traditional black and white by wearing these colors in patterns and permutations of each individual’s choosing — this was not your typical classical concert. And I mean that only in good ways. For example, four founders gave a preconcert talk, and explained that, unlike most orchestras that follow conductors, One Found Sound aims to be nonhierarchical and democratic.

The first piece was Reena Esmail’s Teen Murti. Esmail is Indian-American, and she named this work for string orchestra after both the former residence of India’s first prime minister and a statue on this property. “Teen Murti” means “three statues.” Similarly, this music has three main sections, each of which is based on a distinct Indian raag.  It opened with the low strings playing the drone and a plaintive solo violin theme that developed into a rhythmic tutti section, and this pattern of a featured soloist leading into a western-sounding full ensemble recurred. Especially in light of this piece’s frequent transitions as well as its Indian-inspired, nonwestern flair, it’s mind-boggling to wonder how One Found Sound rehearsed it without a conductor or designated leader.

By blending classical Indian and western music, Teen Murti easily fit with the theme of “diverging” from norms. And unlike the majority of symphonic works that foreground the strings, other soloists share the limelight in Frank Martin’s Concerto for Seven Wind Instruments, Timpani, Percussion, and String Orchestra. Reminiscent of Britten’s Young Person’s Guide to the Orchestra, this three-movement piece highlighted the characteristics of each instrument, from a birdlike flute to the timpanist dramatically rolling across all four drum heads in the finale. It was a whimsical work that resonated with One Found Sounds’ serious commitment to giving every musician in the ensemble an equal voice.

During intermission, nonclassical music played through speakers livened the atmosphere, and audience members were invited to visit the bar. Eventually, everyone found their seats again to enjoy Mozart’s “Little G Minor” Symphony No. 25. (The nickname isn’t Mozart’s, and it distinguishes this work from his penultimate symphony, which is also in G minor.)

When I asked how the players understood this frequently heard Mozart symphony to fit under the umbrella of “Divergence,” Bonomo explained how this piece deviates from classical norms of balance and refinement: Its “Sturm und Drang” (storm and stress) outer movements exploit dramatic, emotive contrasts, and the inner minuet is intentionally not very graceful. At any rate, I appreciated hearing the Mozart because it demonstrated that One Found Sound performs not only lesser-known contemporary works but also canonic classical repertoire with thoughtful sophistication. The horns and oboes in the inner movement were particularly impressive.

It is so refreshing and inspiring to see and to hear this group of courageous young musicians. They are not only maintaining a professional ensemble for themselves to perform in; they are also creating events that appeal to newer, younger audiences. One Found Sound’s deliberate divergence from outdated, stodgy performance practices is an invigorating breath of fresh air. If you would like to experience it yourself, the group has two concerts remaining in its 2018–2019 season.

One Found Sound Pulls Together in Vibrant Opener

The youthful chamber orchestra goes from ebullient to ethereal in a finely balanced concert.