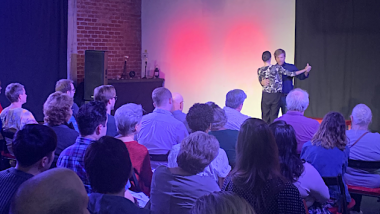 Operas Appear Out of Thin Air in L.A. Studio

Reduced to its barest essentials, all opera needs are voices and a story. This was clear on Saturday night at Los Angeles’s Mimoda Studio, where New Opera West presented five miniature operas. They ranged in subject from a time-travelling moose to Thomas Edison, and the rapid pace made for an exciting program. The five composers, chosen from an open call by New Opera West, spanned a range of approaches.

The evening featured standout singing from soprano Maria Elena Altany who appeared in three of the works. In composer Rachel J. Peter’s Steve, Altany sang the role of a woman at a singles mixer who ends up falling for her dead dog, returned in human form and played by tenor Jon Lee Keenan. Altany’s masterful control allowed her to play the role with humor while tackling its difficult passages. Lee Keenan’s powerful projection glistened against the piano, and the audience laughed throughout.

Altany appeared again in The Moose, a work by Jeremy Rapaport-Stein, whose dissonant, winding lines told of a moose who travels from the future to warn a couple of impending apocalypse. Soprano Maria Dominique Lopez and baritone Joseph Dhanens played the couple, and did so with humor and solid technique.

Tenor Edmond Rodriguez gave the evening’s highlight in a solo performance of A Fragile Filament by composer Robert Cohen and librettist Herschel Garfein. In the work, an older Thomas Edison looks backward on his discovery of the light bulb, and Rodriguez brought a warm and notably smooth line to his singing. At times, the music bordered on the lines of musical theater but the tonal melodies were welcome in the middle of the program.

I didn’t understand the need for conductors in these short operas. The entire instrumental accompaniment was provided by a piano and the singers seemed to rarely glance at the conductor. There were a few moments where the presence of a conductor seemed to slow down the communication between piano and singer.

Pianists Younghwa Ha and Luis Reyes traded off on the operas. They each understood when to place the music behind singers and when to place the piano front and center. Ha’s dramatic timing was particularly evident. She plays with a nimbleness which felt as flexible as the singer’s voices. This is the best you could ask for from an accompanist.

The evening was successful because of its mix of themes, shifting quickly between outright comedy, sentimental reflections on history, and somber reckoning. The darkest piece was composer and librettist Ben Stevenson’s Recovered, which placed two characters together at a table after a drug-related death. Soprano Maria Dominique Lopez was riveting in her portrayal. Much contemporary opera tends to deprioritize acting, but Lopez played the role as intuitively as if this were a spoken play.

The last opera, She’s Fabulous, told the story of two sopranos criticizing a rival during a performance. Soprano Maria Elena Altany returned was joined by soprano Emily Thebaut, cofounder of New Opera West. Each brought a capable account to this humorous crowd-pleaser. It was a self-conscious look at the opera world that any music student would have appreciated. Altany and Thebaut’s voices dovetailed in competition, as the two characters bicker over whom would best perform Don Giovanni. It was just the high note to end the evening on. 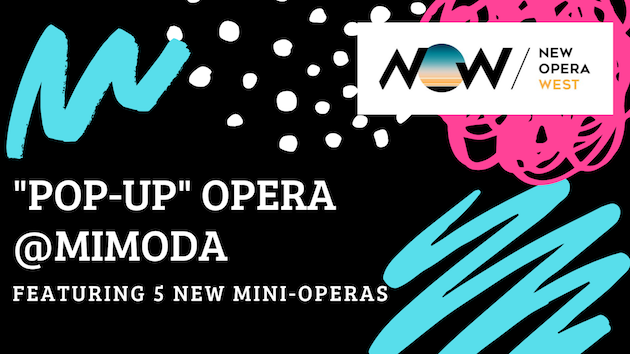 Barrie Kosky’s Magic Flute Comes Into Its Own

LA Opera’s latest wakes up an audience in the wake of #MeToo.

A Snapshot of New Opera on the West Coast

Cyril Deaconoff’s The Last Tycoon is the standout in an evening of exciting excerpts that left listeners wanting more.