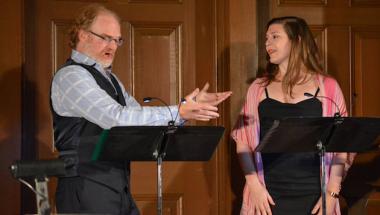 There’s no time to be bored at Snapshot, West Edge Opera’s evening of excerpts from new operas. Saturday’s program included brief scenes from five different shows; even the weakest didn’t overstay its welcome, and when they were good, they were over too soon.

These semistaged readings received no help from sets or costumes, the reckless acting made possibly by memorization, or even full orchestration (Earplay, the small ensemble conducted by Mary Chun and Jonathan Khuner, returned). Yet even in bare-bones form, I was convinced enough to see most of these operas in full, should the opportunity arise.

Take Death of a Playboy by Brian Rosen. A husband (Jason Sarten) and wife (Molly Mahoney) have an argument at Hugh Hefner’s funeral. She’s a bitter ex-Playmate; he’s a mansplainer (“You didn’t seem unhappy,” he says, of the period during which his wife was pacified with Quaaludes).

The Ella Fitzgerald-flavored patter song, about all the various things she had to do to stay in Hefner’s good graces, is one of the best musical moments. But what makes this opera interesting is the central premise: How do you evaluate someone’s worth?

It all rings true. There’s judgment from the wife and thick-headedness from the husband, yet the lines never feel preachy or flat. Humor helps: Darron Flagg, as the winsome priest who always seems to take up the service right as the argument is really getting heated, and Julia Hathaway, as the new Bunny who is just so empowered. Yet Hathaway isn’t merely comic relief; in fact, at the end of the scene her character develops beautifully. Kudos to Rosen and to his female friends who did sensitivity reading.

On the other hand, Dynamo, albeit with pleasant music by Larry London, feels wooden. He and librettist William Smock set out to portray the complex, flawed life of Thomas Edison — but the text, which is hell-bent on rhyming (incurring lots of bad imagery and a generally sing-songy feel) holds it back. The acting, then, is like a pageant gone wrong; June Cleaver delivers more naturally.

452 Jamestown Place, by Santa Barbara-based composer Katherine Saxon, is considerably more alive — because the main character (Heidi Moss’s Bekah), who has dissociative identity disorder, acts so erratically. We meet her alters: a young child, an angst-ridden teen, a boy. They’re all vehicles for the composer to dabble in different styles, and Moss seamlessly commanded them. The scene, though, doesn’t leave a deep impression, and the score sometimes feels flat. But there are several pretty moments — Sarten’s entreaties, as the supportive friend, for Bekah to “stay with me” — and I’d give the show a chance.

I’d also see She Who is Alive, Erling Wold’s opera on the thriller novel by Robert Harris. The premise — in a dystopian world, a plucky and intelligent female prisoner answering to a male — is similar to something we saw last year. Maria’s only lines are “Yes,” “No,” and “I don’t know.” Mahoney’s presence was strong but I’m not sure another singer would make as much of the character. Yet this interrogation scene is uniquely captivating. There’s something attractive about the combination of the interrogator’s (J. Raymond Meyers) sequence of nonsensically abstract questions (“What is the difference between animals and humans?”) and the groovy minimalism of Wold’s arpeggios. This was the only idea we saw, but Wold is local, so stay tuned.

At last year’s Snapshot, the clear winner for me was Stephen Eddins’s Why I Live at the P.O., a 1940s jazz-influenced work that felt fresh, yet was musically and theatrically conventional enough to conceivably be shopped around to companies of various sizes and sensibilities. This Saturday, Cyril Deaconoff’s The Last Tycoon excelled for the same reasons.

David Yezzi’s libretto, based on the F. Scott Fitzgerald novel, is flowing and concise. And even unstaged, this routine scene — at work with the Hollywood producer Monroe Stahr (Meyers) — flies by. The colorful score, with flourishes both MGM and angular, could be dazzling when translated to full orchestra. Stahr’s soliloquy to his dead wife (Hathaway, whose offstage voice we hear) recalls Erich Wolfgang Korngold in the best way, giving just enough character insight before coming to a close. Tenor Jacob Thompson was strong among the supporting cast.

Unfortunately, the promise of these Snapshot previews doesn’t always translate to full-blown productions for the finished operas. It doesn’t look like anything further has happened with Why I Live at the P.O. since last year; a first performance is hard, but a second, a fifth, harder. In fact, Palo Alto’s West Bay Opera read the first act of The Last Tycoon in 2011, and I hope that Deaconoff, who works in the Bay Area, finds a home for the full-length work. 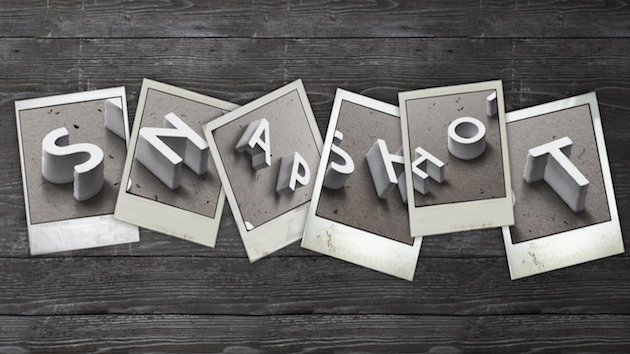 The adventurous company steps into the breach with a new festival featuring new operatic works in development.