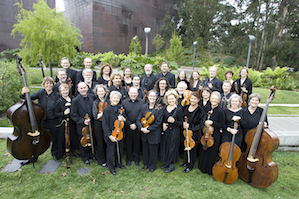 Berkeley’s Zellerbach Hall was generously festooned with poinsettias on Saturday, when Music Director Nicholas McGegan, his Philharmonia Baroque Orchestra (PBO), its Philharmonia Chorale, and a select quartet of exquisite vocal soloists took to the stage for Handel’s Messiah, presented by Cal Performances and repeated on Sunday afternoon at the Green Music Center at Sonoma State University.

Messiah has long been a part of the musical Christmas holiday tradition, especially in the U.S. and the U.K., but George Frideric Handel (1685–1759) originally intended his composition for the Easter season. It premiered on April 13, 1742, during Lent, in a concert hall in Dublin and has been performed every year since.

Messiah’s immense popularity shows no sign of waning. And how could it? In McGegan’s own words (in a video on the PBO website), Messiah is “beautiful music set to great words — and Handel very carefully makes sure that the words have enormous prominence.”

On Saturday evening it was McGegan and his enchanting ensemble that carefully made sure that every one of those great words was clearly understood and intended for nothing else than to underscore what a fantastic piece of music Messiah is.

PBO had already made abundantly clear that it was in fine form during “Solomon in London,” its subscription concert with music from three relatively unknown Handel contemporaries, given one week earlier and in an almost identical configuration at the First Congregational Church, across the street from Zellerbach Hall in Berkeley.

In spite of Zellerbach’s acoustical limitations, it was immediately clear that PBO and the Chorale were setting out for an even more fantastic musical journey, right from the start of the beautifully phrased opening “Sinfony.”

Under McGegan’s direction, the musicians and singers captured every detail and nuance of Handel’s score with serene engagement.

McGegan is a known Handel scholar who has been intimately involved with Messiah for more than 40 years; he obviously knows the piece inside out. Under his direction, the musicians and singers captured every detail and nuance of Handel’s score with serene engagement.

Even though its libretto is a masterful compilation of excerpts from both the King James Bible and the Anglican Book of Common Prayer, with scenes from the life of Jesus Christ from birth through crucifixion and resurrection, Messiah feels like a worldly, highly operatic work. McGegan approaches the music that way, emphasizing the secular, theatrical side of Messiah, leaving it to the text to convey religious content.

As Scott Fogelsong says in the program notes: “Messiah stands apart as having at least one foot in homey, popular theater. Messiah does not call upon us to repent, to anguish or to ponder: its raison d’être is to offer reassurance. It was created to provide pleasure and entertainment, and if it managed to tuck a bit of spiritual renewal into the mix, so much the better.”

Philharmonia Baroque’s Messiah did all that, and more. Not only did it provide pleasure and entertainment, it also served up ample amounts of drama, excitement, and immense spiritual beauty.

Within the velvety-sounding Philharmonia Chorale (directed by Bruce Lamott), the sopranos were especially awe-inspiring in the way they navigated Handel’s coloraturas with ethereal ease.

Not only did PBO provide pleasure and entertainment, it also served up ample amounts of drama, excitement, and immense spiritual beauty.

The four vocal soloists also went from one shining moment to the next: tenor Lawrence Wiliford, with his clear tone and fine vibrato; countertenor Jay Carter, who was exceptionally intense in the sorrowful, languid aria “He was despiséd”; bass-baritone Philip Cutlip, furious in “Why do the nations …” but triumphant in “The trumpet shall sound,” together with the pointed trumpet solo of PBO principal Kathryn Adduci; and the wonderful soprano Yulia Van Doren, never lovelier than in the aria “Come unto him,” of which the alto sings the first part “He shall feed his flock,” set to the same gorgeous melody.

Tradition unfortunately dictates that audience members withhold applause between arias, but had this been an opera performance, there would have been an immediate eruption of cheers and brava’s after Van Doren’s solo. And there were many more times that I felt an upwelling of gratitude in the auditorium for which there was no real release.

Too bad that McGegan’s operatic approach to Messiah doesn’t allow for more public display of admiration during a performance. The relatively small flurries of applause at the end of each of the three parts really weren’t enough reward for this delightful Messiah.