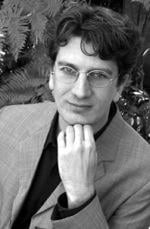 Rebecca Liao on September 22, 2009
Warhorse has become a dirty word, synonymous with tired and predictable. If a musical warhorse is included in a concert program, particularly one as important as the season opener, its function is to appease those who did not love the aural and intellectual assaults that preceded it. So it’s fitting that the Bay Area Rainbow Symphony, a gay and lesbian volunteer orchestra whose enterprise is based on daring, would disregard the trend with an opening night lineup featuring one very short contemporary piece and two warhorses. The title of this program? “To Music.”

Saturday night at the San Francisco Conservatory Concert Hall, BARS Music Director Daniel Canosa kicked things off with a work by John Corigliano that also bore the name To Music. As strings took flight in a lyrical arc, a quiet leitmotif gathered momentum until it stopped all music from the orchestra and was flung to the brass section sitting in alcoves behind the audience. As tension was convincingly built by their colleagues on stage, each component of the brass section brought the audience closer to earth with audibly breathy technique and malformed notes. Nevertheless, the music could be clearly recognized as fragments from Schubert’s An Die Musik.

Technical insights aside, as historical accounts have it, whenever Rachmaninov performed his own Rhapsody on a Theme of Paganini, Op. 43, he established its character as a conversation, not just between piano and orchestra but with a third party, as well.

On Saturday, pianist Daniel Glover began that work auspiciously. His abrupt, casual movements mimicked the typing of a message one letter (note) at a time. Glover is supremely comfortable with virtuoso passages, his stoic gaze following the near-routine dance of his fingers. With the slow, unornamented strains of “Dies Irae,” however, Glover began to forcibly nod his head to make sure notes came at the correct time. He could not take advantage of the Rhapsody’s privilege of rubato.

The orchestra, by contrast, seized the opportunity, phrasing the famous 18th variation the way the piano should have, with a purposeful irregularity that displayed such sincerity and understanding. Co-concertmaster Xander Abbe had foreshadowed this sound with his solo in the 16th variation, expertly controlling the melody’s diminuendo more with the furrow of his brow than the drag of his bow. In the end, Glover had the last word with a witty farewell from the piano. It earned several laughs and, appropriately enough, several “Bravo”s with articulately trilled r’s.

The third work of the night was Dvořák’s Symphony No. 8 in G Major. As delightful as its never-ending parade of melodies is to play and hear, the scoring challenges each group of instruments with a unique role in the development of thematic gems. Strings executed beautifully. Rather than make plain a certain interpretation, they stuck strictly to the score and used an easy legato to avoid sounding too technical. The flute and piccolo rarely relished their star billing, but were competently birdlike and childlike and held their own in fights for dominance with the strings. Fortunately, the brass significantly tightened up their technique from earlier in the evening. Occasional bad notes and tentative playing did not diminish the display of Slavonic grandeur. Any individual shortcomings aside, the orchestra’s frenzied, almost manic (yet organized) push to the finale was a promising indication of this group’s effectiveness as a musical body.

BARS generously offered an encore: baritone Jay Pierson singing An Die Musik, to close the circle. Pierson’s middle register boasted a pure and elegant tone. His low notes, however, were inaudible, and a palpable reach for the higher notes betrayed less than ideal polish. Still, it was a lovely gesture from an orchestra whose earnestness in music-making is truly a breath of fresh air in the classical music scene.