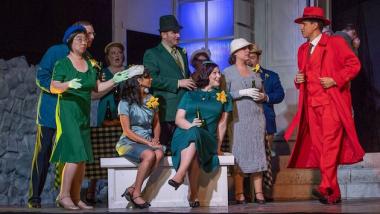 Seeking out the location of Pacific Opera Project’s production of Mozart’s Don Giovanni amid the graffiti-covered landscape of downtown L.A.’s arts/warehouse district made it clear this was not going to be your traditional opera-going experience.

It actually brought to mind Mozart’s decision to stage his final opera, The Magic Flute, at the Theater auf der Wieden in a working class suburb of Vienna. It wasn’t fancy or glittery. There was plenty of food and drink and a general disdain for high society snobbery. It was a lot like The Vortex, where Saturday a jovial, decidedly casual audience sat at cafe tables and enjoyed platters of antipasto and bottles of wine in anticipation of the opera to come.

Since 2011, POP’s formula of combining wining and dining with cleverly updated interpretations of classic operas, sung by talented younger singers, has gained a loyal following. And by the time the lights dimmed and the orchestra conducted by Ryan Murray intoned the opera’s ominous opening chords, every seat was filled.

From the black-and-white film-noir sequence that accompanied the overture to the cartoon-bright costumes (by Maggie Green) to the gangland setting, this was Don Giovanni meets Dick Tracy.

Directed by the company’s founder, Josh Shaw, it’s very clever and fluidly staged. Subtlety, however, is not Shaw’s long suit. He pushed comedy toward broad farce, the sex gags toward crude, and the violence to extremes. The moments of the opera that were most effective were when the singers took control and brought the music to the fore. At other points, Shaw’s direction was distracting and disruptive rather than insightful. His prodution mostly succeeds because the singers, chorus and 20-member orchestra give their all.

Dressed in red from the tip of his fedora to tip of his shoes, bass-baritone Adrian Rosas strikes a dashing figure as the rakish don. He reminded me of Frank Sinatra’s Nathan Detroit in Guys and Dolls. His performance captured just the right combination of gangster bravado, eruptive violence, and Casanova charm.

With the current headlines about sexual misconduct by men in power and the momentum of the #MeToo movement, Don Giovanni takes on more relevance than ever. He is abusing the power of his aristocratic position, not taking advantage of his sexual desirability. And if Shaw had really wanted to rock the boat he could have cast the Don as Harvey Weinstein or Donald Trump.

Even so, it’s difficult not to see the women in the opera as a reflection of today’s issues: Saira Frank as Donna Anna, an emotionally traumatized rape victim who ultimately succumbs to an overdose of drugs; Daria Somers as the love-torn Donna Elvira trapped in an abusive relationship; and Tiffany Ho as the innocent newlywed, Zelina, who doesn’t know which way to turn.

Each of these women limned their characters with emotional detail in each of their star turn arias. Saira Frank was particularly moving in “Non mi dir;” Daria Somers captured Donna Elvira’s conflict well in arias such as “Non ti fidar;” and Tiffany Ho was a charcming Zerlina as she wrapped Masetto around her finger in “Batti, batti.”

E. Scott Levin has a fine baritone voice, but his Leporello under Shaw’s direction pushes him in the direction of a comic buffoon. Luvi Avendano, as the man struggling to keep the Don away from his young bride, plays Masetto as a general good guy who is just overpowered by a bully. His voice, however, was merely adequate

Shaw’s cops-and-robbers premise establishes the Commendatore as the chief of police in Gotham City and during the opening film sequence we see the unveiling of a commemorative statue that will make its return at the end of the opera. That climactic moment, when 6-foot-10-inch Andrew Potter makes his entrance as the avenging statuary, is a theatrical tour de force, as are Potter’s low notes.

In addition to his freewheeling, supertitled translation of the libretto, there are two moments when Shaw really plays fast and loose. Don Ottavio, sung by Robert Norman with a truly lovely, Mozartean tenor, is usually portrayed as well-meaning but ineffectual. Shaw turns him into a Bulldog Drummond who will do whatever it takes (including ripping the fingernails off a member of the Don’s gang) to get what he wants. His gun-to-the-head suicide, following the drug overdose death of Donna Anna, is totally bizarre since he and Donna Anna are meant to return for the opera’s final triumphal ensemble. Shaw’s solution is to simply cut the ensemble.

Because of the logistics of the hall, placing the orchestra in a partially open adjoining room may have been a necessity. It certainly muffled the acoustics. Fortunately, Ryan Murray’s conducting and the performance by the 20 members of the orchestra provided mostly solid accompaniment to the singers.

The audience was generous with their applause throughout and they could take their wine home. What’s not to like about that?

Opera on Tap Takes Opera to the People

From bar stools to church pews and playground benches, the visionary program makes opera accessible and fun for all.