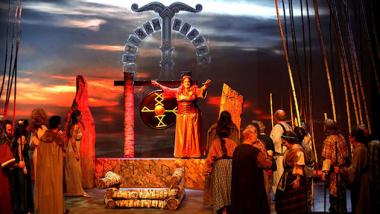 Classic opera at a reasonable cost, with excellent leads and a strong orchestra, presented in a reasonably sized hall, nestled among a lovely grove of oak trees — who could ask for anything more?

The oak grove at Palo Alto’s Lucie Stern Theater was an appropriate locale for West Bay Opera’s fall production of Bellini’s Norma, whose forceful heroine guards the sacred oaks (and dependent mistletoe) of druidic Gaul. The production, continuing this weekend, presents Bellini’s lyrical music with the fiery emotion and steely control that it demands.

If all Gaul is divided in three parts, as Caesar wrote, so too are its high priestess’s hyper-conflicted loyalties. Betraying her responsibility to her people, who are oppressed by Roman rule, Norma has for years secretly loved Pollione, the Roman proconsul, and borne him two children. But Pollione now loves another druid prestess, Adalgisa, for whom Norma is, in turns, rival, supervisor, and BFF. This love-triangle plays itself out in a tightly-woven series of revelations and reversals, and — needless to say — does not end happily.

The title role famously demands a wide vocal range and a charismatic emotional presence, as well as the technical ability to manage Bellini’s intricately crafted lines, which bristle with complicated trills, runs, and other ornaments. Soprano Christina Major, singing Norma, made it all happen. Although Bellini has little interest in character development — he tends to give Norma first one mood and then another, without any transition — Major eloquently bridged the gaps that Bellini leaves, suggesting, or at least inviting us to imagine, the heroine’s inner thoughts.

Norma’s opening recitative, her fierce denunciation of a rebellious contingent of her countrymen, flowed seamlessly into the very different aria that follows, the famous “Casta diva,” her noble and heartfelt prayer to the goddess of the moon. The sense of continuity — especially crucial for such a tragic story — was enhanced by consistently excellent playing in the pit, and sensitive conducting by José Luis Moscovich, West Bay Opera’s longtime general director.

Mezzo-soprano Veronica Jensen sang Adalgisa with a hauntingly dark viola-like timbre and extraordinary control of both pitch and tone. Jensen’s rendering of Adalgisa’s fleeting moments of confrontation — with rival and lover — were less effective than her splendid duets with Norma, in Bellini’s sensuous and powerful alternatives to the relentless tragedy of betrayal and vengeance.

The role of Pollione was sung by Benjamin Sloman, who has a fine, strong tenor voice — perhaps too strong for the small auditorium of West Bay Opera. The haughty grandeur that matched his authority as a Roman officer unfortunately left little room for sexual chemistry with either of his two lovers.

It is wonderful that West Bay Opera takes on a tremendously difficult opera like Norma and delivers it with such musical force. It would be even better if its fascinating contemporary relevance — national pride, women’s tenuous access to power, the desperate attraction of revenge — came across more convincingly in the acting and the sets. The action was too often dependent upon stock rhetorical gestures, and the sets seemed stuck in a 19th-century fantasy of druidic barbarity. The strangely plaid costumes and frequent baring of male chests (with body painting) did suggest a newer source (perhaps the film Braveheart), but that didn’t really illuminate the tense power struggles of the opera.

Who could ask for anything more? For me, it would be to find actions and gestures that conveyed the drama as more humanly recognizable, and a mise-en-scène that helped the audience see the many potential connections of this intense opera with our vexed contemporary world.

There are additional performances October 21–22. See the West Bay Opera website for details.

Strauss’s complex, modern opera is lifted by strong performances on stage and in the pit.

The ambitious company’s production had lively acting and singing, but a few misfires in the orchestra pit.