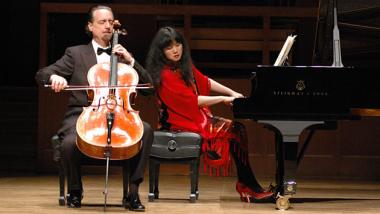 Cellist David Finckel and Pianist Wu Han, met when Ms.Wu won a competition while studying at University of Hartford, Connecticut. The prize was a performance opportunity with the Emerson Quartet, of which Mr. Finckel was the cellist.

That was in 1981. They then fell in love, married in 1985, and the rest, as they say, is history. The couple formed a strong, long-lasting partnership, and their collaboration extended not only to chamber music performances, but also to programming and running the [email protected] Festival and the Chamber Music Society of Lincoln Center, in addition to a recording label. They have even been called the “Power Couple of Chamber Music.”

The all-Russian program on a warm Sunday afternoon at the Hertz Hall in Berkeley, under the auspices of Cal Performances afforded us an intimate view of their partnership in action.

The ravishing Rachmaninov Sonata at the end of the program was a particularly fine example of the partnership. The extravagant, lyrical lines were accompanied with rich harmonics, which reverberated through the hall, produced by Wu's generous application of the sustain pedal,. The undulating, heaving breaths, along with the nervousness that permeated the second movement, tugged at the heart. The coyly melancholic third movement, the most famous of the four, was indulgent without becoming overly sentimental. Here, Finckel and Wu played, breathed, and spoke of love as one.

The coyly melancholic third movement … was indulgent without becoming overly sentimental. Here, Finckel and Wu played, breathed, and spoke of love as one.The first half of the program, with sonatas by Prokofiev and Shostakovich had a drastically different feel. The humorous Prokofiev, opening with a cello solo which Rostropovich is said to have described as the opening of the Great Gate of Kiev, was hurried, and textural details were drowned in overuse of the sustain pedal. In the comical second movement, opportunities for punches and slapstick humor were missed as well. Finckel valiantly projected a wide gamut colors and textures, but Wu seemed indifferent to the articulation markings in the score.

Shostakovich's sonata was far more convincing, and the solemn and tragic third movement had a haunting quality, which possessed qualities of many shades of dark grey. I would have wanted the deathly coda of the first movement to be slower and metronomic, to illustrate the oppressive Stalinist regime, but the fiery second movement that immediately followed danced fervently.

The sweetest moment of the afternoon was a brief interlude, in the form of Five Preludes, Op.16 for solo piano by Scriabin. Wu Han explained to the audience that something was needed to prepare the audience for the Rachmaninov. The brief pieces, composed by the youthful Scriabin while on a dare to compose 48 preludes in a short time frame, were richly indulgent and dreamy, and Wu transported us to a different time and place before Finckel joined her to perform Rachmaninov. I could not imagine a more fitting palate cleanser.

The recital concluded with a transcription of Rachmaninov Prelude Op.23, No.10, a sweet morsel of Romantic indulgence.