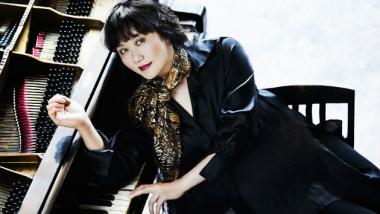 In Franz Schubert, [email protected], the summer chamber music festival, has found its ideal subject. From songs to sonatas to string quartets, the great bulk of the composer's work was for small groups or soloists. The festival's second of five Schubertiades only reminded us that Schubert was first and foremost a chamber musician.

“What’s a Schubertiade?” you may ask. The term was coined by friends of Schubert to refer to intimate and informal concerts celebrating the composer’s music, usually with Schubert himself presenting. Two-hundred years later today, the composer’s spirit is still present at Menlo. The festival's second Schubertiade was held at the Stent Hall at Menlo School on Friday. While decidedly not as intimate or informal as depicted in Julius Schmid’s painting, it presented a varied program that intertwined music for different ensembles from different periods in the composer's life.

The core of the evening was the authoritative reading of the Sonata in A Major, D.959 by the festival’s co-director, Wu Han, at the end of the program. From the opening theme of the first movement, the sonority was rich and lush, yet preserved the sense of utmost intimacy through whispering pianissimo.  Steady heartbeats were maintained through the somber, slow second movement while the remorseful melody shed tears.

The heaviness of the second movement, however, spilled into the scherzo movement, with some the lightheartedness lost in the sustain pedal. Nevertheless, the silliness brought smiles in the trio section, and by the end of the movement, Han was clearly having fun. The final rondo movement explored a wide gamut of emotions, from desperation and doubt to wistfulness and hope: quite fitting for work that was completed mere months before Schubert’s death.

The final rondo movement explored a wide gamut of emotions, from desperation and doubt to wistfulness and hope: quite fitting for work that was completed mere months before Schubert’s death. Han probed through different states utilizing the full range of colors and dynamics available in the modern Hamburg Steinway. Here, it felt as though Schubert’s life work was distilled into a movement.

The evening opened with a pair of rarely heard sonatinas for piano and violin, performed by violinist Sean Lee and pianist Juho Pohjonen. While composed when Schubert was still in his teens, they possessed the sense of doom found in his later works. The readings, however, were decidedly more Classical in style, almost Haydnesque. With the performers’ dry articulations, they contrasted with Han’s aforementioned reading of a sonata later in the evening.

Sandwiched between the sonatinas were four songs composed between the sonatinas. Baritone Nikolay Borchev, in his festival debut, projected the level of clarity that the repertoire requires. He eloquently navigated from the nervousness in “Abschied von see Harfe” (Farewell to the harp) D.406, through elegant warmth in “Frühlingslied”, D.398 then to the rambunctious character in “Die Knabenzeit” (Boyhood), D.400. The accompaniment by Hyeyeon Park was discreet yet supportive, though contrapuntal elements were lost at times.

Yet, Borchev truly shone, when accompanied by Han, in “Im Frühling” (In the spring) D.882, immediately after intermission. This song was written 10 years later than the others, and the performers employed a richer, more colorful timbre.. Lyrical lines were woven freely at times, and more tightly at others, through whimsical modulations found in the piece. The arrival of spring could not have been more welcomed.

Not to be outdone, violinist Lee presented a Heinrich Wilhelm Ernst transcription of “Erlkönig” D.328, a Paganini-like technical tour de force. Somewhere in translation, however, the lyrical line was lost in the torrent of notes. Yet, it was certainly a crowd pleaser.

Bringing the evening closer to perfection were the refreshments during the intermission: Delectable desserts were accompanied by free-flowing wine and coffee, bringing us back to the Viennese salon in the 1800s. More concerts should be enjoyed this way.