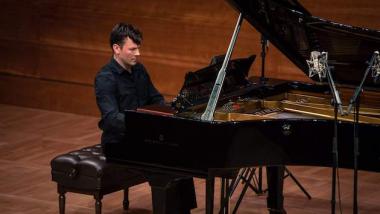 The new music collective Wild Up set up shop in a percussion warehouse on Friday night. The audience arrived to Cal Perc to find an intimate semicircle of chairs surrounding a single piano. The warehouse was dark and unheated but carried a charm, and we were surrounded by percussion instruments. Wild Up prepared hot cider for the small concert and the disarming informality proved a good fit for a complex contemporary work.

Pianist Richard Valitutto was the soloist of the evening in the West Coast premiere of composer Sarah Hennies’s SOVT. The hour-long work, featuring prepared piano, takes its name from “semi-occluded vocal tract” — a singing technique in which a vocalist uses a partially closed mouth. The piano here, playing the role of the mouth, was prepared with putty covering the strings.

Valitutto explained that this preparation connected all strings in order to create a sympathetic vibration. The individual strings were bridged together. The sound was unusual, even for prepared piano. Rather than simply muting the strings, this approach allowed large clusters of notes to resonate even when a single key was struck on the piano. On the lower end of the keyboard, notes sounded as billowing chords. On the higher end, the notes resembled wood blocks. The venue choice of a percussion warehouse was apt as the piano was featured principally as a percussive instrument.

The work was a rewarding challenge for both player and audience. Lasting exactly one hour, the music unfolded slowly, in large sections. Slow, repeated notes were intoned for minutes on end, before slight changes appeared. Without a standard structure of melody to latch onto, the ear lacked usual benchmarks to judge how much time had passed.

Hennies’s attempts to conjure alternative sounds were capably produced by Valitutto, who managed to thread a narrative through large blocks of repeated notes. Some effects were even shocking — he pulled off several minutes of rapid scales that resembled a child’s toy xylophone spun out of control.

The work was most interesting as an exploration of human endurance. Entire stretches of music consisted of a single repeated note, often at quick tempi that continued for minutes on end. To watch Valitutto command his instrument in these moments was to watch an act of physical endurance. After one particularly taxing passage, his chest heaved as if he had just run a few miles.

Toward the end, Valitutto used the sustain pedal as a kick drum, accompanied by the high notes of the instrument, which sounded like wood blocks. In both sound and appearance, the piano was played like a drum kit.

Part of the enjoyment of this work stemmed from the visual component. Valitutto is not a passive performer and this piece requires the pianist to move through the piano’s space. He switched between sitting and standing, bent over the inside of the instrument, playing the keys with one hand and manipulating the instrument’s strings with the other. His understanding of the piano’s mechanics was impressive.

While the final minutes taxed the ear with pure repetition of a single, slow note, the work managed to produce a trancelike quality. Without forcing us to focus on melody or harmony, we came away from the hour with a heightened awareness of rhythm. SOVT paid homage to the physical construction of the piano and Valitutto’s keen percussive sense served it well.

Wild Up Launches “Darkness Sounding” in Venues Around L.A.