One of the most polarizing albums of all time was John Coltrane’s 1965 free jazz manifesto, Ascension. Many of Coltrane’s devoted fans, even those who could take the atonal flights of Live at the Village Vanguard or Transition, retreated in horror when this boiling 40-minute cauldron of abrasive, violent, yet logically organized sound came out. It solidified Coltrane’s position as the spearhead of the jazz avant-garde, and some thought it reflected the anger of the emerging black-power movement as well as Coltrane’s endless search for spiritual meaning. It can still be a challenging listen today; if you want to break the lease on your apartment, lay a little Ascension on the neighbors (I’m kidding, but it is powerful stuff). 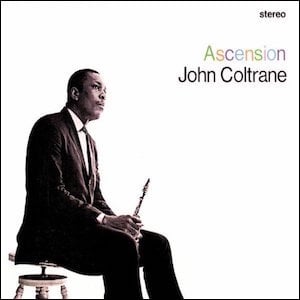 Ascension was a touchstone in the life of Christopher Rountree, the leader of the anything-goes new-music group wild Up, but he and the band applied a different spin to its meaning at The Soraya at Cal State Northridge Saturday night, November 10. Note that the concert was titled “Of Ascension,” meaning that it was not a literal re-creation of the album but rather a set of compositions that ranged all over the stylistic map yet would “ascend” into a musical universe of its own. I’m not sure that they succeeded in having every piece correlate, but it made for a wild night of music in Northridge

The Soraya has been putting on an increasing number of events where the audience sits onstage on risers staring out into the empty hall, with the performers practically in their laps. So went this affair, with the added feature of some of wild Up’s musicians equipping themselves with minicams to take close-up videos of their colleagues in action and even themselves, projecting the images for us on two video monitors.

One piece followed another in quick succession; in two cases, Weston Olencki’s bent and Jen Hill’s Piece for Internet, it was difficult to tell when the Olencki piece ended and the Hill piece began. There were solo showcases for individual members, plus a song by Icelandic pop star Björk, “Desired Constellation,” as a reposeful interlude in the dark.

Electronic barrages wafted through Ted Hearne’s One Like and invaded Olencki’s bent; the latter had accompanying video images from our digitized, pixelated world. The astonishing posthumous renaissance of composer Julius Eastman rolled on with the bass-rich chords and slow-moving chromatic scales of If You’re So Smart, Why Aren’t You Rich? (great ironic title), which had to be transcribed from a recording since the score vanished long ago.

And yes, the sound world of Ascension was there, too, in spurts. The massed, free-jazz blasts from the 13-person group in Hearne’s other piece, Illuminating the Maze, would have been right at home in Coltrane country. So would certain passages in One Like and bent, and Brian Ferneyhough’s workout for bass clarinet, Time Motion Study I could have been mistaken for a New Thing jazz improv were it not for the fact that the piece is painstakingly written out in full.

Now suppose wild Up had met Coltrane’s album halfway; in other words, prefacing each of the nine pieces on the program with wailing, free-for-all interludes from the entire band. That is the way in which Ascension operates, with improvised solos from Coltrane and each of his players instead of composed pieces. Maybe that’s too obvious a tribute, but I bet it would be an exhilarating one.

The New Music Paradox, Part 2: Lessons From the Front Lines

New music may be suddenly hip but keeping an arts nonprofit afloat is still challenging.