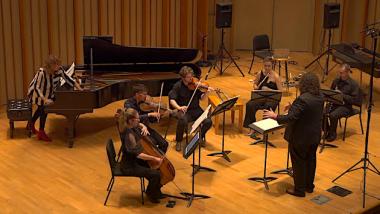 Once the preserve of adventurous programs for solo piano, Piano Spheres has been spreading its net in recent seasons to take in other instruments and new vistas, just as long as a keyboard of some sort is involved. On Tuesday night (Nov. 19) at the Colburn School’s Zipper Hall, it was Vicki Ray’s turn — and in the course of a program showing off the spectral movement that flourished for a while in the late 20th century, she played some vintage electronic keyboards that you don’t see very often anymore.

Ray called it “a period-instrument concert” — which is a humorous yet accurate way of putting it. Moreover, there was a narrative in play, with one composition pointing the way to the next, with the whole program displaying a consistent sound world regardless of the means of production, be it electronic or acoustical.  It was a fascinating concert — at times gripping.

“Spectral” music — a term that its most noted exponent Gérard Grisey disowned — uses computer analysis of the harmonic spectrum in order to generate ideas for composition. To oversimplify things perhaps, timbre and texture become more important than pitch. But we listeners need not be concerned with compositional techniques; rather it is the sensual impression that the music makes that draws our attention.

The concert led off with Atlantys, a work by another major figure of spectral music, Tristan Murail, for two Yamaha DX7 synthesizers. The first digital synthesizer to catch on in the mass market, the DX7 was the hot keyboard of the 1980s; its distinctive electric piano patch can be heard everywhere in pop records from that decade. Murail jumped right onto the bandwagon with this alluring piece in 1984, a year after the DX7 came out, as part of his Random Access Memory cycle — and in doing so, exploited the synth’s pitchless and timbral capabilities way more than the commercial music industry dared. Ray and keyboardist Aron Kallay performed on a pair of genuine, borrowed DX7s, producing a spectacular array of shimmering timbres, deep bass, and outer-space effects entirely consistent with the instrument’s glistening, chromium-plated sonic profile.

Ray then reached back a little further into keyboard history in a collaborative piece with Stephen Lehman called Hybrid Vowels, seating herself at an oddly-shaped Yamaha CP80 Electric Grand Piano. Since it is portable to some degree, the CP80 was in vogue for a little while in the late-1970s among touring pop and jazz pianists until improved miking techniques on conventional acoustic grand pianos — and later, the digital piano — rendered it obsolete. Despite its hybrid nature, the CP80 still sounds like a pale electronic imitation of an acoustic grand, not quite there, but it served Ray’s purposes with tingling trills high in the treble while alto saxophonist Lehman ran his horn through a panoply of sustained electronic effects. The result, despite the differing timbres, was a de facto extension of Atlantys, with an agitated section for contrast midway through.

The electronics were jettisoned for the final piece of the night, one of Grisey’s last works before his premature death in 1998 and probably his magnum opus, Vortex Temporum. The wash of surging, fading, and repeated color at the beginning picked up from where the preceding two pieces left off, and Grisey subjects subsequent patterns to similar treatments over the span of 43 minutes in three sections. There are occasional outbreaks of microtones and multiphonics, along with bowings across the edges of string instruments separating each section, creating sounds that resembled quiet breathing. Though a bit too long, the piece has shape and much sensual appeal.

For Vortex Temporum, there was a sextet containing three-fourths of the Formalist Quartet (Andrew Tholl, violin; Andrew McIntosh, viola; and Ashley Walters, cello), performers from the wasteLAnd collective (Rachel Beetz, flute; Brian Walsh, clarinet, Nicholas Deyoe conducting) — and of course, Ray, who got a showy percussive cadenza in Part I that ended with a crash of the elbows deep in the bass. On a good old-fashioned acoustic grand piano, one is prompted to add.

The line between pop and classical continues to blur, in a three-concert series presented by Christopher Rountree and Anna Bulbrook.

The composer joins forces with students and faculty from CalArts.

The Claremont Trio Showcases Commissions on Queen of Hearts