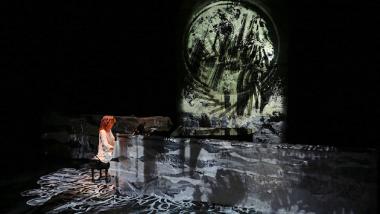 Time itself was on display Wednesday night at the CalArts REDCAT space in downtown Los Angeles. Pianist Vicki Ray presented a solo concert of two works with the accompaniment of visual projections by artist Carole Kim. Each one used time to different effect and allowed Ray’s nimble virtuosity to fill the hall.

The evening, “Vicky Ray and Carole Kim: Rivers of Time,” began with composer Ben Phelps’s Sometimes I Feel Like My Time Ain’t Long, piano variations set over a repeating folk song recording from the Alan Lomax Collection of American folk music. The recording amounted to only a few seconds of singing, but it repeated throughout the piece, slowing and stretching, allowing Ray to explore new harmonies and embellishments beneath a changing soundscape.

The piece successfully exploited the differences we hear when a single recording is repeated at different speeds. At times, the recording played so slowly that it sounded like Gregorian chant. Ray shined during these sections, bringing a delicate and rapid accompaniment to a hazy background of suspended voices. It was easy to lose track of time at these moments.

Ray’s virtuosic speed was on display throughout the work. Phelps’s composition called for frequent use of the entire range of the piano, sending Ray’s hands jumping from the middle notes to the outer extremities over the course of seconds.

Next was Daniel Lentz’s River of 1000 Streams, which also made use of the piano’s entire range. What began as rapid flurries at the bottom of the keyboard slowly ascended to the piano’s highest notes over the course of nearly 25 minutes. By the end, Ray’s hands were up hammering out rapid tremolos in the instrument’s stratosphere. As Ray made the climb, recorded echoes of her own playing billowed across the sound system, creating a surreal space. As the work progressed from low to high, the pressure of the sound dissipated. The effect was like a scuba diver slowly making her way to the surface. Ray’s hands provided a visual account of the flow of time, marking the distance traveled, like a stopwatch.

Most chords began quietly and then grew in intensity, and the audience got a sense for Ray’s technique as she alternated between using her fingers and her arms to generate movement. As she made her way elegantly through a technically demanding work, her left foot occasionally dangled from the bench, as if she were dipping it in a pool.

Perhaps to address the monotony of a single ascending direction, an occasional slow melody poked its way among the rising chords. The piece was ultimately more effective because of these moments. Ray deftly handled the task of accompanying herself in this piece as she played over recorded echoes from moments earlier.

Throughout both works, Kim’s projections appeared on a backdrop and two short walls planted on the stage, surrounding the piano but still allowing a view of the pianist. Her visuals ranged from snake-like depictions of water to abstract shapes and shadows. At times, it appeared difficult to link the shapes directly to the music, but they often gave new a dimension to the performance by invoking changes in color which blended well with variations in the piano’s tone. The visuals manipulated time as well, moving between shapes so slowly that it created a meditative aspect to the performance.

But Ray’s playing stole the show. In two pieces that present such slowly developing musical material, she varied other aspects of sound — weight, volume, resonance — to create a changing story arc through each piece. Her playing contained notable clarity. Even in the most rapid passages, individual notes jumped off her keyboard like pointillist painting.

The composer brings new work to the Pivot festival inspired by a cross-country train adventure.