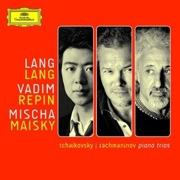 Pulling Out All the Stops, and Then Some

This new release of piano trios by Tchaikovsky and Rachmaninov features three virtuoso musicians delivering gushy music gushily. In a way, this likely was the way this music was played in its own day, minus emotive restraint. This can almost be considered to be a recording as a historical study, free of the sometimes exaggerated objectivity of contemporary performances.

The works at hand are Tchaikovsky’s Piano Trio in A Minor, Op. 50, and Rachmaninov’s “Trio Élégiaque” No. 1 in G Minor of 1892, a piece never assigned an opus number. The ensemble consists of violinist Vadim Repin, cellist Mischa Maisky, and pianist Lang Lang (Deutsche Gramophone 80013504-02).

Subtitled “In memory of a great artist,” Tchaikovsky’s only Trio honors the memory of his mentor, severest critic, and promoter, the virtuoso pianist Nikolai Rubinstein. When Rubinstein died in 1881 at age 46, Tchaikovsky immediately set to work on this large memorial piece. It couldn’t have been an easy task, for it took him a full year to complete — an unusual thing for the normally fast-paced composer.

It consists of only two very large movements of symphonic scope: a sonata movement and an equally large set of character variations. The variations are of a simple, folksy tune — which it may well have been in reality, for all I know — and run the usual gamut of character variations: a waltz, a mazurka, a funeral march, the obligatory little fugue, and the like.

The piano writing is much in the style of Tchaikovsky’s piano concertos, in line with the dedicatee’s fabled virtuosity. It’s just that it’s a piano concerto, albeit with only two other musicians. Lang Lang, himself famous for his dexterity, is up to the task of getting all the notes in with ease, while the string playing is fine indeed. Only, there’s a problem that may annoy some ears while delighting others, depending on your temperament.


As mentioned before, these movements sound like something played as if it were still the 1890s. Rubato is laid on with a trowel, so that the music tends to gush a lot. Even the simply, folksy tune for the variations gets a hard-sell treatment. On the other hand, if you like your beef with tons of gravy, this will satisfy, in full.

The first of Rachmaninov’s two trios was written in 1893, shortly after Tchaikovsky’s, which had been an obvious influence on the 19-year-old composer. A year later, Rachmaninov wrote his second “Trio Elegiac,” his Op. 9, and revised it twice, in 1907 and again in 1917.

Rachmaninov’s piano writing for this one-movement first trio is typical of his style: rich in chromatics, beautifully melodic, Russian to the core. Lasting only about a quarter hour, it’s cast as a rhapsodic sonata form — though more rhapsody than sonata, to my ears.

It’s also closer to being genuine chamber music than is Tchaikovsky’s Trio. The piano, while important, is less dominant. Rather, a listener hears a true partnership amid the part writing. The violin and cello parts don’t serve as mere also-rans, as I fear they do in the Tchaikovsky. Then too, the Rachmaninov is tied to no particular event other than Romantics’ great affection for minor keys.

Interestingly, the playing of these three musicians is more restrained, more under a self-controlled emotional style than during the larger Tchaikovsky composition. Not that the performance is at all “dry,” mind you, but only that they project a bit more elegance in their playing.

DG’s sonics are wide-ranging and crystal clear. Pianissimos, as at the opening of the Rachmaninov, are played at a whisper, while the major loud passages sound as if you were seated in the front row — or perhaps on stage. Resonance is present but never exaggerated. This is a first-rate release, then, assuming you like Romantic works played with all flags flying.