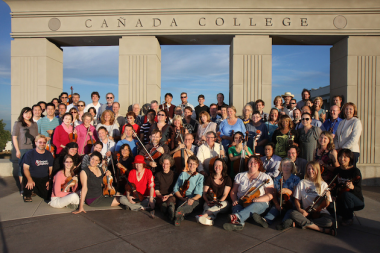 To hear an entire Mahler symphony in one sitting is a magical journey that can be mentally draining, and to play one start to finish is an exhilarating, physically exhausting adventure. Scaling “Mount Mahler” is a feat that even the top-tier orchestras only occasionally dare to attempt.

That’s because the symphonies of Mahler are the epitome of the Romantic era’s orchestral literature: maximal size with about a hundred players on stage, maximal length (over an hour), maximal pitch frequency range with featured solos on growling contrabassoon and eardrum-piercing piccolo, maximal dynamic range with barely audible murmurs growing to eardrum-busting bass drum and cymbal crashes, and maximal expressive range from ecstatic to defeated to transcendental.

Redwood Symphony is a community orchestra with lots of chutzpah. In their 30 years, they have played not one, not two, but all nine of Gustav Mahler’s symphonies (some of them more than once).

On Saturday night at Cañada College the symphony played Mahler’s Ninth. Before the concert, I wondered whether an amateur orchestra could pull it off. Notwithstanding a few intonation zingers, I was really impressed. Redwood Symphony captured the spirit of the piece in all its diverse colors and moods. The strings played with unified phrasing and lush sound, especially in the last movement.

Mahler’s marking for the ländler movement is Etwas tappisch und sehr derb or “Somewhat clumsy and very coarse.” Mahler knew that overly refined orchestral playing can sometimes sound too antiseptic — lacking a natural earthiness. There is a lot of charm in rough or improvisatory playing that he might have heard in a countryside tavern of his day. In that sense, Redwood Symphony carried out Mahler’s directions perfectly.

Scaling “Mount Mahler” is a feat that even the top-tier orchestras only occasionally dare to attempt.

The word amateur comes from the Latin root amare (to love). Amateur orchestras play for the love of music, and it shows. Music Director Eric Kujawsky led the orchestra in a feisty performance, coaxing enthusiasm and elegance from the players.

Redwood Symphony is one of several amateur groups in the area: Palo Alto Philharmonic, South Bay Philharmonic, South Bay Symphony, Silicon Valley Symphony, Awesöme Orchestra Collective, and even the TACO (Terrible Adult Chamber Orchestra) in Los Altos are a few that give casual musicians the opportunity to play music together for eager audiences, and all are an important part of the classical music ecosystem.

But only one of the above orchestras would brave Mahler’s Ninth, and for this ambitious boldness the Redwood Symphony should be congratulated.