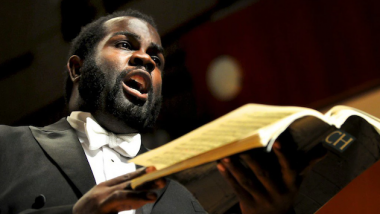 Reginald Mobley Sings of War and Peace With Agave Baroque

“It is in … dark times that we truly see the immense power that music has in its ability to motivate, comfort, and heal,” wrote countertenor Reginald Mobley in the program notes for his concerts with Bay Area-based, early music ensemble Agave Baroque, last weekend in Palo Alto, Berkeley, and San Francisco.

In search of suitable repertoire, it was a natural step for Mobley and Agave Baroque, which specializes in string chamber music of the 17th and 18th centuries, to delve into the dark times during and after the Thirty Years’ War (1618–1648).

What started 400 years ago as a religious war between Catholic and Protestant states, ultimately became one of the longest and most destructive conflicts in European history, causing an estimated 8 million casualties and wide-spread devastation. Some German states lost between 40 and 75 percent of their population to warfare, famine, and disease.

All this inspired Mobley and Agave Baroque to create the project Peace in our Time — music of love and loss in the shadow of the Thirty Years’ War, which included last weekend’s concerts for the San Francisco Early Music Society (SFEMS) and a brand new recording.

If nothing else, Peace in our Time was a testament to the fact that, even under hardship, and especially in the aftermath of great tragedy and upheaval, art can flourish and offer mankind its remedial and therapeutic properties.

Case in point was the Lamento “Ach, daß ich Wassers gnug hätte” (O, that I had water enough in my head) by Johann Christoph Bach (J.S. Bach’s first cousin once removed; 1642–1703), in which Mobley mournfully expressed the protagonist’s wish for enough tears to bewail his sins day and night.

The concert on Sunday afternoon took place at the Church of the Advent of Christ the King in San Francisco, an unassuming, decent sounding concert venue. Agave and Mobley would have been worthy of an environment with more generous acoustics, but in this attractive space the ensemble’s sound was crisp, clear, and detailed.

Some of the instrumental highlights of the concert were the Sonata by Matthias Weckmann (1616–1674), with its multitude of upward flowing, broken-chord motifs; and — in a surprising and interesting appearance — the Canon in D for Three Violins and Basso Continuo by Johann Pachelbel (1653–1706), complete with accompanying Gigue. Stripped from its tired wedding associations, it felt like a new piece.

But it was the interaction between Agave and Reginald Mobley that created the real magic. In Christum ducem, qui per crucem (To Christ the King, who through the cross) by Johann Rosenmüller (1619–1684), with its elegant, forward moving continuo part; or in Herr, wenn ich nur dich habe (Lord, if I have only Thee) by David Pohle (1624–1695), ending in a glorious coloratura aria that the countertenor sang with gusto.

Post-intermission, Mobley was sweet and playful in Salve mi Jesu (Save me, Jesus) by Franz Tunder (1614–1667), and he ended the performance with another two charming pieces by Johann Christoph Bach: the Ciacona Mein Freund ist mein (My friend is mine), and the beautiful Es ist nun aus mit meinem leben (My life now ebbs away), leaving no doubt that he is a fantastic countertenor, and one of the best in the business.

An Interview With William Lyons: Eclectic About Early Music