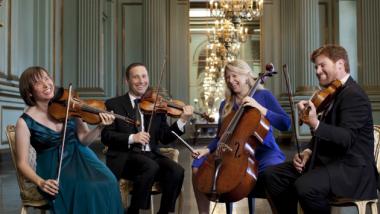 Reimagining Beethoven With Help From the Cypress String Quartet

It had been more than 20 years since his previous excursions in the genre, and Hersant’s Quatuor à Cordes No. 3 was such a marvelous piece that I ended my review with the hope that we didn’t have wait another 20 years for one of his string quartets.

Hersant, born in 1948, is not the first composer to be commissioned twice for Call & Response; George Tsontakis, Jennifer Higdon, Jeffery Cotton, and Elena Ruehr preceded him. But he is still the only non-American composer on the list, and the first one to be re-commissioned after only three years.

The idea behind Call & Response, which started in 2000, is to have a modern-day composer “respond” to the “call” of specific pieces from the traditional string quartet canon and create a new work. In 2012, Hersant more or less skirted the issue. By his own admittance, his quartet did not have any obvious or direct references to the Haydn and Beethoven quartets that were on the program that evening.

His fourth quartet, however, is a very direct response to Beethoven’s Op. 59 No. 2, and more specifically, to the second movement, marked Molto Adagio. “Most of the elements I use in my String Quartet No. 4 are borrowed from Beethoven’s,” Hersant writes in his program notes. “These elements are often small motifs, rhythms, or harmonies ... reworked, presented in new ways, subjected to extensive development, and metamorphosed, but they permeate the entire work, in overt and subtle ways.”

According to his student Carl Czerny, Beethoven found inspiration for this slow movement “while contemplating the starry sky and thinking of the music of the spheres.” To Hersant, the movement creates a “sense of infinity” and of “meditative inner travel,” as he said during the pre-concert conversation with UC Berkeley musicologist and Beethoven scholar Nicholas Mathew.

Der Gestirnte Himmel starts off with a single note in the second violin, but the other voices soon join in to form a mesh of intertwining melodies that linger but gradually move out of their horizontal state.

The viola starts a solo melody, the cello answers, and at some point the ensemble gets caught in an angry tremolo. Episodes of evolving dissonance constantly interrupt the proceedings and slowly mutate with every return.

Hersant has described himself as a “tonal composer who is willing to turn music's entire heritage, from Monteverdi to Janacek to Stockhausen, to his advantage.” This strong connection to music from the past manifests itself in subtle shades of Schubert, echoes of Bernard Herrmann, hints of Shostakovich.

Hersant also uses a direct quote from Beethoven, in the form of the “Russian” theme from the third movement, but this new quartet is most of all a composition with a highly individual character, a voice of its own, and an abundance of persuasive eloquence.

The members of CSQ (Cecily Ward and Tom Stone, violin; Ethan Filner, viola; and Jennifer Kloetzel, cello) applied their superb musicianship to Hersant’s imaginative score and treated the Beethoven quartet that opened the concert and Bartók’s Fourth String Quartet after intermission with the same degree of musical understanding and profundity.