What can folk music help us hear?

Giddens: a singer, banjo player, fiddler, and MacArthur Fellow committed to recovering and reimagining long-buried historical truths via folk music. Turrisi: a deft Italian multi-instrumentalist — truly exceptional at jazz piano, accordion, and very likely over 100 percussion instruments — as well as an excellent educator and researcher. Sypher: a gifted bassist at home in a wide range of musical styles, as well as Giddens’s longtime touring collaborator. 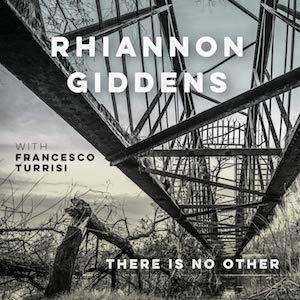 This group performed material from there is no Other (2019), an acclaimed, collaborative album that Giddens and Turrisi released last May. A display of sheer intelligence, generative research questions, and a commitment to social justice, the concert capped off a two-day whirlwind of Stanford events, including a prestigious Kieve Lecture through the Center for Comparative Studies in Race and Ethnicity the previous evening. By all measures, it was astounding: Each instrument on stage indexed journeys across the Atlantic; each anecdote relayed different, difficult histories of trauma and erasure; each traditional tune and original song placed these histories in close proximity, implying and layering connections through the signature subtleties of Giddens and Turrisi’s musical designs.

The trio opened with a moving medley of “Ten Thousand Voices,” a haunting, modal original featuring Giddens on vocals and Turrisi on banjo; “Inside Me Is Heaven,” an affirming, emotive piece with Giddens on fiddle and Francesco on accordion; and a loping instrumental finale that seemed to tell, in its own way, a story of uncertainty and persistence.

These songs, like all the trio’s others, were born of Giddens and Turrisi’s historical studies. With “Ten Thousand Voices,” for example, Giddens and Turrisi mentioned they were inspired by music scholar Ned Sublette’s study, Cuba and Its Music — by its attention to the history of the slave trade in the Caribbean, as well as its invocation of a 9th-century treatise by author Amr Ibn Bahr Gāhiz. (The anecdote: in that treatise, quoted by Sublette, Gāhiz writes about an “Abyssinian” Qiyān, or an enslaved black woman known for virtuosic singing, who had “a repertoire of upwards of 4,000 songs, each of them two-to-four verses long ... the total amount of poetry contained ... comes to 10,000 verses.”)

It was stories like these that built the scaffolding for the evening. Every song, instrument, and timbre was given its due space, explanation, contextualization. The effect: Every sound became an invitation to consider what music makes it possible to say.

If I had to choose highlights from the concert’s first set — an impossible task, given the rare shape of the evening — I’d likely be tempted to go with Giddens’s stunning delivery of “At The Purchaser’s Option,” a heavy song inspired by the chilling story of a black, enslaved mother up for sale and her 9-month-old child available “at the purchaser’s option.” I’d also be tempted to go with “Gonna Write Me a Letter,” a steadfast, North Carolina classic by songwriter and banjo player Ola Belle Reed. Or maybe “Briggs Forró,” a blistering tune featuring densely harmonized rhythmic passages that displayed Turrisi and Giddens’s sheer facility and accuracy. Or maybe “Pizzica di San Vito,” a whirling Italian folk song that Turrisi connected to a broader history of trance rituals.

I’d be tempted, too, to focus on moments of subtle, onstage communication among the trio: when, for instance, Giddens, Turrisi, and Sypher would face one another and form a power triangle, distancing the craning crowd in a most loving way. Or when, during the end of the opening medley, Sypher, whose bass playing was adding new (and literal) depth to there is no Other’s arrangements, nodded at Turrisi and Giddens, and the entire group brightened the tempo slightly, and their collective magic made a crowded hall inhale.

But what I’d probably end up choosing — again, impossibly so — would be Giddens and Turrisi’s knowing glances amid their stories on minstrelsy as the first American cultural export, on histories of trans-Atlantic anti-Sicilianism, and on the invention and continual reconstitutions of whiteness. Their subtle signals reiterated the night’s main point: this road is long and hard, and it’s only in each other that we find the strength to walk it.

During intermission, scribbling frantically in my notebook, I couldn’t help but reflect on two other Stanford events Giddens and Turrisi participated in during the 24 hours leading up to this concert: a lunch conversation at the Harmony House, the hub of Stanford’s Institute for Diversity in the Arts, and a two-hour Kieve Lecture, delivered on Thursday night at the Bechdel Conference Center. Specifically: I couldn’t help but reflect on Giddens and Turrisi’s braided approach to music making, historical research, and social justice — on what they’ve been working to help the world hear.

“We do research,” Giddens mentioned at lunch, “because we want our questions answered. Really. There’s no book, no unified whole. The questions that we’re asking haven’t been asked in the ways that we’ve been looking for. Not in that comprehensive way, anyway. Lots of people have small pieces of it. But together, we don’t have a whole yet. (And honestly, in some cases, nobody has the pieces at all.)”

“And these kinds of questions,” Turrisi continued, “on the surface, they lead to these very erratic movements, but there’s always a deeper connection revealed. I find myself jumping from one thing to the next to the next all the time. But there’s a freedom there. This kind of research, it’s without an “end.” We’re not researching in order to publish papers or books. We’re researching to understand things, to connect things, and to follow the stories where they lead us.”

Still sitting in that at-capacity concert hall, the intermission soon ending, I also couldn’t help but reflect on how, just a day earlier, Turrisi and Giddens had hopped off a plane from Ireland and dazzled a crowd of students, staff, and scholars with an incredible set of winding stories. (Or, as literary scholar David Palumbo-Liu put it in his beautiful remarks on Thursday, “arabesques.”)

Flipping through my notes, I found the kind of inadequate (but wholly necessary) diagrams and summaries that so often accompany states of absorption. A sketch replica of Giddens’s timeline of banjo whitewashing in the United States. A visual depiction of Turrisi’s connection of black American minstrel musicians, British imitation janissary bands, and flashy tambourine techniques. A personal reminder to go back to music scholar Eliot Bates’s thoughts on “the social life of musical instruments.” According to Bates, “Much of the power, mystique, and allure of musical instruments is inextricable from the myriad situations where instruments are entangled in webs of complex relationships ... Even the same instrument, in different sociohistorical contexts, may be implicated in categorically different kinds of relations.”

“The banjo, a black instrument,” I wrote. “The tambourine, everywhere.” “Organology as activism. That is: to explore the racial, transnational histories of the banjo and tambourine is to combat cultural amnesia. To pursue such revisionist histories is to chip away at inherited master narratives, to reveal their shortcomings for all. And so to whisper there is no Other is to name love as excavation, as recognition, as confirmation.”

The second half of the concert felt calm, exploratory. Giddens and Turrisi continued their braided storytelling between songs; the huge crowd, long won over, was thoroughly spellbound. (“I just, wow, I had no idea,” the enamored attendee to my right stated after a long slurp of hot tea.)  Every pause to tune up a frame drum or a banjo string was an intimate group huddle. (“That’s right,” Giddens said at one point, “you’re seeing me tune a banjo to an accordion.”) That night, every song was an act of worldmaking, of carving out new space through story.

And again: if I really had to choose some high points, I might be tempted to go with the group’s icy version of Gian Carlo Menotti’s aria, “Black Swan.” Or with Giddens’s conjuring of singer Ethel Waters’s spirit via “Underneath the [Our] Harlem Moon.” Or with Turrisi’s crunchy, churning accordion lines in “Beth Cohen’s Set.” Or with Turrisi’s virtuosic piano and tambourine solos, each of which tested the physical limits of the instruments themselves. Or with the trio’s incredible version of “Molly Brannigan,” which featured Giddens’s skillful code switching between Irish lilting and scat singing.

But in the end, what I’d probably go with would be the opening verses of the hymn “He Will See You Through,” the trio’s final tune before their encore:

By playing that tune to close out a night of heavy history, Giddens, Turrisi, and Sypher chose to invite the crowd in — to try and articulate a few of the legion ways this world has “gone crazy,” to chart a path forward with the tools of song and story. Sitting there, listening to Giddens’ song, I heard an affirmation, and I exhaled, shaken.

The singer and versatile multi-instrumentalist leads her crackerjack band through timeless selections from her pan-Caribbean songbook.

Nathalie Joachim Has a Long Reach on Fanm d’Ayiti