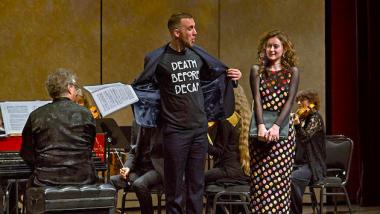 If he didn’t already have the job, as Philharmonia Baroque Orchestra’s next music director, an observer might have thought Richard Egarr was staging a full-dress audition on Friday, February 7, at Herbst Theatre.

Egarr stood front and center in the all-J.S. Bach program. He performed the solo harpsichord part in two concertos, including the dramatic and virtuosic D-Minor, BWV 1052. He conducted two other works while doubling up on harpsichord continuo duties – the Cantata No. 211, familiarly known as the “Coffee Cantata,” and the Orchestral Suite No. 3. And as a droll and informative master of ceremonies, Egarr offered one nugget of information or allusion after another in remarks before each piece. Whale-bone corsets, Monty Python, the date of caffeine’s introduction to Leipzig (1694), Nintendo, and the gender politics of 18th-century coffeehouses percolated through his pithy observations.

The company’s music director-designate added and embraced one cheerful insurrection, calling out the harpsichord “the most unmusical instrument on the planet.” Only by “trickery,” he noted mischievously, could the thing be redeemed.

Justly known for his own harpsichord performances and recordings, Egarr is anything but a stuntman. That was clearly and deeply apparent in the concertos. Playing with lucid and liquid technique, interpretive verve, and rhythmic acuity, the soloist/conductor steered the way with authority and allure.

The evening’s highlight came in the second concerto on the bill, the great D-Minor. It began with a propulsive first movement, bristling with chromatic passagework, pulsing chords, and hypnotic repeated notes. The orchestra, tactfully reticent without every seeming recessive, was ideally calibrated to the harpsichord’s timbre. The strings opened the Adagio with gently heaving sighs, a mood the soloist picked up in his contemplative phrasing and meandering line that gave the movement an almost improvisatory feel. A colorful Allegro, capped by an antic cadenza that threatened to vault off the tracks at one point, brought this delight-filled reading to a close.

The other concerto, a transcription and key transposition of a familiar violin concerto, was, as Egarr, promised, “still perky but somber” in its migration from A-minor to G-minor. The slow movement proved especially fine, with the soloist weaving his way through the orchestral oscillations from bass to treble. A kind of tidal pull took over, quietly forceful, but poised throughout. Egarr’s patient trills and gently sprung rhythms were like ripples sparkling on the surface.

With both hands busy most of the time, Egarr conducted with his head, neck, and torso. The full-body engagement matched the dexterity and variety of his playing. From this “most unmusical instrument” he produced plenty of very musical matter. Egarr can make the harpsichord sing sweetly and growl, fret, muse, and even thunder a little. PBO audiences are getting a keyboard master in their new music director.

In its first performance by the ensemble, the “Coffee Cantata” came off as a skimpy and time-stamped diversion. Scored for orchestra and three singers, the piece serves up a young woman (soprano Nola Richardson) who’s besotted by the new beverage in town. Her vexed father (bass-baritone Cody Quattlebaum) wants to get her off the stuff, promising to marry her off if she’ll give up coffee. Tenor James Reese played the narrator and semisuitor.

Carrying coffee mugs and mugging their way through the recitative-heavy piffle, the singers did their best to give this paper-thin conceit about coffee addiction some life onstage. Richardson had the best musical material to work with and made the most of it. Her bright, crisply articulated tone, shown to best advantage in a beguiling and satiny conversation with flutist Stephen Schultz, earned best-in-show honors. A trio full of simultaneous outbursts brought down the curtain if not the house.

Bulked up with brasses, woodwinds, and timpani, the orchestra powered its way through a vigorous if sometimes galumphing account of the D-Major Orchestral Suite. After deferring to the harpsichord and caffeinated singers, the musicians got to go open throttle at the end. The trumpets and trombones spoke up loud and clear. The strings, especially in the lower end, made their presence felt. But nothing really took flight, including the famous Air (on a G-string). Then again, with the Philharmonia Baroque Orchestra, even pretty good is a tasty brew.

A rousing performance of Handel’s masterwork: Shouldn’t this Hanukkah-themed oratorio be a regular item on the December holiday menu?

The historical-music expert begins work with PBO in the 2020-2021 season.