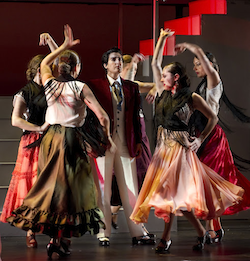 “What a sad day — the stones began to cry.” With that line, the chorus of Ainadamar begins to recall the death of martyred Spanish poet Federico García Lorca. In this haunting and radiant 2003 opera by Argentine composer Osvaldo Golijov, the memory of horrific events is the driving force that keeps souls suspended in a kind of timeless purgatory.

Ten years after its first production, Golijov’s dreamlike opera made its long-awaited Bay Area premiere over the weekend in a stunning new production by Opera Parallèle. With vibrant musical direction by Nicole Paiement, effective direction by Brian Staufenbiel, and an outstanding cast, Saturday’s performance in the Lam Research Theater at Yerba Buena Center for the Arts brought history, tragedy, music, and memory together in a riveting 80-minute staging.

Casting the work in a prologue and three “images,” or short acts, Golijov and librettist David Henry Hwang make Margarita Xirgu, the Catalan actress who was Lorca’s friend and muse, the central narrator of the poet’s story. We first meet her backstage in a theater in Montevideo, Uruguay. It’s 1969 — over 30 years since Lorca’s death at the hands of the Fascist regime during the Spanish Civil War — and Margarita, attended by her young student, Nuria, is preparing to reprise her greatest role as the title character of Lorca’s play, Mariana Pineda. She slips into a reverie, remembering her first encounter with Lorca in the mid-1920s.

The second act harkens back to Spain in 1936; Franco’s forces have made the country “a river of mourning.” Lorca is one of their chief targets; led by Ramon Ruiz Alonso, the Fascists hound the poet, who is eventually arrested and executed at Ainadamar, the “Fountain of Tears” that supplies water for the city of Granada (along with thousands of others, his body was dumped in a mass grave.) The final scene returns to 1969; Margarita is dying, and Lorca’s spirit returns to reunite with hers. Death, the opera suggests, is the passage from a life of sorrow to an eternity of freedom.

Golijov illuminates these episodes with arresting music. Were Lorca and Margarita lovers? The libretto is ambiguous; at one point, Alonso savagely refers to Lorca as “faggot,” but in the 1930s — as in certain pockets of our culture today — simply being a poet could earn you that hateful epithet. Either way, the composer gives Lorca a gorgeous aria to Margarita — floated on luscious strings, it’s ardent and intoxicating.

The opera sags a bit after the poet’s death, but the final scene is transcendent; Golijov savors the sound of women’s voices — Lorca is a trouser role — and the trio for Margarita, Lorca and Nuria recalls the rhapsodic, long-breathed lines of Richard Strauss.

Lorca’s life and times prove fertile material for an opera; not since Tosca has the death of an artist been dramatized to such potent effect ... Ainadamar is an opera for our times, a memory drama recalling events we should never forget.

Staufenbiel’s staging was powerfully focused in every scene. The director introduced an atmosphere of mourning even before the opera began, as chorus members, dressed in bloodstained gowns as brides, widows, and children, wandered through the lobby looking like lost souls. (In the scene preceding Lorca’s arrest, Alonso insists that enemies of the state would be “exterminated, even with seeds in their wombs.”) Staufenbiel and designer Matthew Antaky (sets and lighting) devised a two-level stage with discrete playing areas. Christine Crook’s costumes helped delineate the shifts in time; Austin Forbord’s mordant video projections, aided by Jason O’Connell’s evocative sound designs, depicted horses, tanks and the devastation of war. A superb corps of flamenco dancers led by choreographer and lead dancer La Tania were seamlessly integrated into the action.

The cast was uniformly strong. Marnie Breckenridge was a luminous Margarita; the soprano imbued the role with graceful, otherworldly presence, rich, refulgent tone and a deep sense of her character’s abiding grief. Mezzo-soprano Lisa Chavez was a deft, plush-voiced Lorca; and soprano Maya Kherani was a lithe, silvery Nuria. Jesus Montoya made an imposing Alonso, and John Bischoff imparted a measure of pathos to the role of the executioner, Tripaldi. Andres Ramirez and Ryan Bradford sang handsomely in their respective roles as the Bullfighter and the Teacher. The women’s chorus, and a chorus of Ninas from the San Francisco Girls Chorus, produced celestial sound.

In the end, Lorca’s life and times prove fertile material for an opera; not since Tosca has the death of an artist been dramatized to such potent effect. With its allusions to free speech, artistic integrity, torture, and political repression, Ainadamar is an opera for our times, a memory drama recalling events we should never forget.