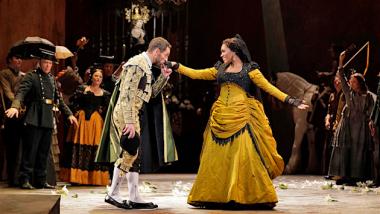 One would think that a company like San Francisco Opera would commit to rethinking the opera in each new presentation. But the production that opened Wednesday at the War Memorial Opera House — a reworking of Francesca Zambello’s 2008 design for the Royal Opera House, London — had little to say to our place or time. Again and again, intrusive stage direction buried the drama with busy crowd scenes, distracting from the music and the meaning, and even obscuring the action (at key moments like Carmen’s escape from arrest in Act I). The costumes, and the production as a whole, seemed designed to conjure up an orientalist fantasy, full of exotic “Gypsies” and silk-emblazoned bullfighters, rather than any real or imagined setting in which the tragedy might make sense to us.

Like many operas, Carmen is deeply problematic — it enacts the murder of a woman isolated by her gender and her race, killed because of her sexual frankness and independence by a man who is an abusive and violent obsessive and at the same time the “hero” of the opera. These are the very issues of American life in 2019, and they need to be engaged, but not through an investment in stereotypes. Carmen’s eroticism does not need to make her into a whore, dipping a flower over her crotch before throwing it to her lover. José does not need to mock-rape Carmen before killing her. And “Gypsies” need to be shown doing something other than come-hither dances on a tavern table.

The production was most convincing when it was least obviously “directed.” As Micaëla, the country girl who rivals Carmen for the love of José, Romanian soprano Anita Hartig sang the finest and most compelling role of the evening. Acting and singing, she was consistently clear and thoughtful. Hartig’s duet with José in Act I and her poignant solo in the third act (“Je dis, que rien ne m’épouvante”) provided much-needed moments of vocal lyricism and dramatic nuance.

The role of Carmen did not fare as well, for obvious reasons. Mezzo-soprano J’Nai Bridges acted the lead with an admirably gutsy athleticism, but her voice, while highly expressive, did not project well. Her singing was repeatedly impeded by stage business, as in the “Habanera” (L’amour est un oiseau rebelle), where the song had to compete with multiple distractions from the constantly moving crowds of guards, cigarette workers, children, and passers-by.

The staging kept pushing Bridges’s Carmen back into obvious, stereotyped gestures. The first time she invited an infatuated lover to put his head under her skirt was annoying; repeated, it was offensive.

Bridges was at her best when the production gave Carmen her own space. The argument with José that leads to her death was performed on a bare stage; here, Bridges seemed free to fully inhabit the complexity of Carmen, singing with dignity and strength, and asserting her independence even while realizing that she will die for it.

Matthew Polenzani, debuting in the role of José, was most convincing in the character’s lyrical moments. His fine, passionate tenor brought out this unlikely soldier’s desperate need for love, most memorably in the introspective flower song (“La fleur que tu m'avais jetée”). But since Polenzani’s rendition of José’s yearning was more convincing than his anger, it was hard to see the trajectory of his sudden, repeated eruptions of violence.

Bizet’s Carmen is a strange beast, an expansive spectacle with a tense, bitter love triangle at its core. In other hands (Mascagni or Puccini, say), the opera could have been a sparer, more intense psychodrama in the verismo mode. But Bizet’s Paris audience demanded more spectacle, and Carmen has that in full: processions and promenades, Gypsy dances, brigands, and bullfights.

At the center of the spectacle is the toreador Escamillo. Bass Kyle Ketelson sang the famous “Toréador, en garde!” with an appropriately trumpet-like timbre and an insouciant swagger. Rather absurdly, he was made to enter the tavern in Act II on the back of Drogan, a charming, docile horse with curly mane, ample fetlocks, and obviously no interest in fighting bulls.

Natalie Image and Ashley Dixon (current Adler Fellows with San Francisco Opera) portrayed Carmen’s girlfriends Frasquita and Mercédès with pluck and lucidity, especially in the card-reading scene, where their bright fantasies of love and riches offset Carmen’s impassioned reading of her own darker destiny.

James Gaffigan made his San Francisco Opera debut with this performance, and while he kept strict dynamic control over the orchestra, the ensemble too often felt ragged, especially in the overture.

If we are to have yet another Carmen, San Francisco Opera can do better than this.

Carmen, Without the Sizzle

Carmen, with its string of great tunes that never fails to lure audiences to the opera house, lacks the spark of life at Livermore Valley Opera.

A Carmen That Plays by the Book at Opera San Jose