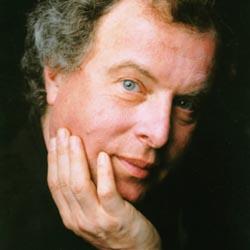 Were there to be a triumvirate of the “B”-class(ical) composers, it would consist of Bach, Beethoven, and Brahms. Some may find that list too Germancentric, and often it’s Brahms who is replaced by such composers as Bartók and Berlioz, depending on contexts. (Do I hear anyone for Berg? Bernstein? Barber? Bacewicz?) It was the Bach/Beethoven/Bartók combination that was presented by the venerable András Schiff at Zellerbach Hall on Wednesday.

The recital program was an ambitious one, though perhaps not for a pianist who has recently completed a cycle of Beethoven’s 32 sonatas. The focal point of the evening was Beethoven’s “Diabelli” Variations, Op. 120, after the intermission, which consists of a rather crudely written 32-measure theme by Anton Diabelli followed by 33 variations, including a fugue that reaches deep into Beethoven’s toolbox. The variations were composed as a contribution toward a stunt by Diabelli, then a music publisher, who solicited composers of the time throughout Europe to contribute a variation each, to be assembled into an anthology. Not satisfied by submitting just one, Beethoven wrote 33 variations, which eventually formed the first part of the Vaterländischer Künstlerverein. The work spans nearly an hour, peppered with many musical and technical challenges, and Schiff wove them together to form a cohesive narrative.

Schiff opened the theme at an aggressive velocity, notably faster than what a waltz would be. Yet, it was jovial and bright, almost like a fanfare or an overture for the upcoming auspicious event. The first variation, a stately march, was given a royal treatment with a majestic character. A series of vignettes followed: the lyrical third movement was beautifully feminine, and a warmly colored brass quintet was heard in the fifth. The hummingbird-like tremolo and the rumbling trills in the 10th variation ended with a jabbing punch, accompanied by a humorous gesture by Schiff, who stared directly at the audience, eliciting laughter. The crude 22nd variation, with a reference to Leporello’s aria in Mozart’s Don Giovanni, was delivered jokingly, and was followed by the nervous 23rd variation, where Schiff delivered alternating-hand chords with extreme but cool precision.

The most profound variations of the entire work were the three in minor key near the end. The 29th variation, marked Adagio ma non troppo, was a solemn account, and the canonic 30th variation was meditative. The richly chromatic 31st variation showed that Beethoven was by then very much working in the Romantic style; the embellished lyrical line above the often-chromatic left hand accompaniment evoked Chopin nocturnes, for which the world had to wait another 10 to 15 years.

The work ended with an angelic, lullaby-like interpretation of the last variation, delivering a satisfying end to the evening.

Even in comparison with the massive “Diabelli” Variations, the first half of the recital was no lighter in substance. Schiff began the evening with all 15 of the Bach "Three-Part Inventions." His interpretation was stoic, running a relatively narrow gamut of colors. That approach was nevertheless effective in bringing the audience to a different place from the outside, as if the 15 inventions were a series of appetizers, in preparation for the 33-course meal after the intermission. The prevailing calmness brought an organlike quality: reverent and solemn.

The audience in Berkeley seemed uplifted by the thrilling interpretation of the Bartók Piano Sonata Sz. 80. Schiff approached that fiendishly difficult piece with raw pungency, its pulsating rhythm causing the often-dissonant chords to jump out of the piano. The lyrical second movement was tied together through a solid rhythmic integrity that gave an unambiguous directionality, while the explosive third movement was treated with a vivid contrast between the percussive and melodic components. The excitement grew relentlessly in the coda, with a bombastic, no-holds-barred chord that slammed the deal shut. It was one of these moments when the artist on stage had total control of the audience, and it was clear who won.

Schiff gave a nod to two of the “B” composers by offering two encores: the kaleidoscope-like Beethoven Bagatelle Op. 126, No. 4, and Bartók’s notorious Allegro Barbaro. The audience seemed to want to hear a Bach piece, but it was left for Schiff’s next visit, which cannot come soon enough.