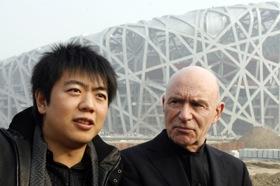 Conductor Christoph Eschenbach took over Davies Symphony Hall last Monday evening for a wildly successful concert of his Schleswig-Holstein Festival Orchestra, aided and abetted by pianist Lang Lang. It amounted to a brilliant display of a special type of youth orchestra that has been springing up over the past 25 years or so.

The conservative program opened with Beethoven’s “Leonore” Overture No. 3, Op. 72b, followed by a highly stylish performance of Mozart’s Piano Concerto No. 17 in G Major, K. 453. Following intermission, the program continued with Prokofiev’s Symphony No. 1 in D Major, Op. 25, the “Classical”; and Beethoven’s Piano Concerto No. 1 in C Major, Op. 15.

Many youth orchestras have existed for high school music students for at least 50 years, and of course nearly all colleges and universities have an orchestra. Well and good, but then came the problem young musicians encountered between their final music education and their professional life. The latter requires a wealth of knowledge of the full basic repertory. I recall my semipanic the first time I faced playing orchestral excerpts from Wagner’s Die Götterdämmerung and Mahler’s Fifth Symphony. Nothing had prepared me for those demanding oddball scores, least of all supplied me with the proper style.

The newer concept encompasses a possible solution to such problems: a youth orchestra of musicians in their early 20s, largely conservatory graduates on the verge of a professional career. Such is the Schleswig-Holstein Festival Orchestra, founded in 1987 by Leonard Bernstein. Eschenbach has been in charge since 2004.

International auditions bring young musicians into this orchestra from around the world. At present, the oldest player is 26. Once assembled, the members are given a full scholarship that includes training members of leading orchestras — in this case, the Berlin Philharmonic, the Hamburg Radio Orchestra, and others — and they play concerts under an assortment of major conductors. Four or five years under these conditions, and they’re supposedly ready for anything.

Walk on the Wild Side

Eschenbach chose dangerously difficult standards for his San Francisco program. “Leonore” No. 3 is no walk in the park. The demands on the strings, which open its finale, are treacherous, and the same is true for the winds in the finale of Prokofiev’s “Classical” Symphony. Beethoven requires a full, muscular style of sonics, while Prokofiev’s homage to Haydn and Mozart is a totally different study of subtle elegance. And there’s no wiggle room in either composition, since they’re such established symphonic standards.

In the event, the performance last week brilliantly demonstrated just how sterling these young musicians are polished. Of course, Eschenbach’s firm mastery of rehearsal technique, as well as his long-time musical acumen, no doubt played a major part in his young musicians’ being able to play with such conviction. The orchestra’s woodwinds and horn section solo bows were especially deserved. But then, the whole ensemble was amazing, not least for all the players’ consistent grasp of proper style.

Lang Lang, too, was amazing in his rendition of Mozart’s “Little Bird” Concerto, as his Piano Concerto No. 17 has occasionally been called. The composer bought a singing starling that could “sing” the theme for the variation-finale of this concerto. But it has never been fully determined whether Mozart taught the bird the tune, or the bird taught it to Mozart. Even so, as a gesture to his feathered friend, the final variation is a little musical portrait of that bird, fluttering wings and all.

Lang Lang captured all the delicacy of the piece, showing a finesse and lightness of manner I’ve not heard in him until last Monday. He and the orchestra partnered each other beautifully.