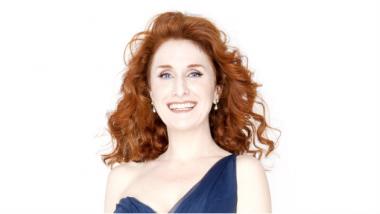 On Schumann’s Big Night at the Symphony, Strauss Stands Out

One of the San Francisco Symphony’s tasks for this season is to record Robert Schumann’s four symphonies for release on its in-house label, SFS Media. Earlier this month, Michael Tilson Thomas and the orchestra started the project with the composer’s Symphony No. 3, and they will conclude it in the spring of 2016 with live recordings of the Second and Fourth symphonies.

Last week’s concerts, which I attended on Friday, Nov. 20, featured Schumann’s Symphony No. 1, “Spring,” paired with — and largely outshined by — music by Richard Strauss.

Strauss composed his Brentano Lieder, Op. 68 for soprano and piano, in 1918, and he orchestrated them in 1940. For this collection of songs he used original poems by German Romantic poet and novelist Clemens Brentano (1778-1842).

The texts deal with love, longing, loneliness, and desire. Strauss’ settings are brilliant, lush, and playful — much more interesting than the poetry itself — but also very demanding when it comes to the vocal range, expression, and technical ability of the soloist.

It is obvious that soprano Laura Claycomb has “lived” with the Brentano Lieder for some time. She sang them with MTT and the Symphony in 2005, and everything about her performance last week showed a deep awareness and understanding of both the text and the music. From the way her posture and demeanor changed with every song to the effortless way in which she blended lyricism with virtuosity, Claycomb captured and conveyed the essence of Strauss’ five Brentano Lieder.

From the way her posture and demeanor changed with every song to the effortless way in which she blended lyricism with virtuosity, Claycomb captured and conveyed the essence of Strauss’ five Brentano Lieder (the sixth song, “Lied der Frauen,” which completes the cycle, is often omitted as it was here). It was an outstanding interpretation in every way.

Strauss’ other contribution to the evening was the elegant Serenade in E-Flat major, Op. 7 from 1882, an early piece for 13 wind instruments which was gracefully rendered by the orchestra’s excellent wind players.

MTT’s approach to Schumann’s First Symphony was profound and sincere. As always, one of the strongest aspects of the interaction between the orchestra and its music director is the instinctive, almost chameleon-like ability of the ensemble to absorb the energy of a piece and emulate the exact right (in this case very German) sound to perform it.

It is almost guaranteed that the ultimate recording of the four Schumann symphonies will be of the highest standard — the standard which we have come to expect from the Symphony, and its recording projects. But I doubt that much of Friday night’s performance will end up on the final product, if anything. The few little irregularities that were easy to overlook during this otherwise exquisite performance would stand out disproportionately when entrusted to compact disc.