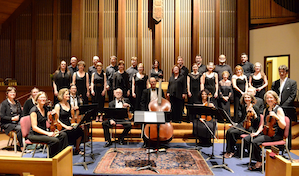 On transit, I occasionally encounter chic, expensive business suits combined with dirty sneakers. At work, my new, fast computer is encased in cheap, cracking plastic. Usually, reasons for quality discord are readily apparent, but Saturday’s well-attended concert of Bach and Buxtehude by the period-instrument ensemble Marin Baroque left me scratching my head, wondering why the ensemble paired a tight band of talented instrumentalists with an unbalanced choir of lackluster singers. Marin Baroque, founded and conducted by Daniel Canosa, is a young organization completing its first season, but the concert, held at the St. Vincent’s Chapel in San Rafael, left the impression that it is still finding its mission.

The concert began with a Telemann Suite featuring Kathryn Adduci, a trumpet professor at San Jose State whose playing I already knew from several solo appearances with Philharmonia Baroque Orchestra. Adduci’s flawless, clear tone was supported by a sympathetic accompaniment of instrumentalists well versed in the style. The articulations were effective without becoming cartoonish, and Canosa, who gesturally makes a very graceful podium presence, pushed the band into more flowing phrasing rather than underscoring a more-dancelike character.

The remarkable Buxtehude cantata Herzlich Lieb hab ich Dich, o Herr (In my heart I hold you dear) began auspiciously with the sopranos intoning well-blended chorale phrases over a fluid accompaniment. Although the tone was a bit young, this suited music originally intended for choirboys. Unfortunately, the rest of the choir came in. The lower voices were amateurish and undeveloped, which would have been instantly apparent in a less flattering acoustic. The choir balanced 11 women against 6 men. Moreover, I knew all but one of the instrumentalists from the American Bach Soloists and Philharmonia Baroque Orchestra. I only recognized two singers.

Adduci’s flawless, clear tone was supported by a sympathetic accompaniment of instrumentalists well versed in the style.

According to the Marin Independent Journal, the audition notice on the SFCV website, and other information I received, the choir was described as “professional.” It is not. By the standards of a selective amateur group, multiple elements of the performance were good: The music was in tune, for example, and cutoffs were clean. Unfortunately, professionalism demands good voices in addition to musicianship and adequate vocal training. If it’s a matter of limited budget to pay a full professional choir, Marin Baroque’s would have been an easy fix. The entire concert could be sung by a smaller choir, or even one-on-a-part. Rather than promoting auditions, Canosa could have engaged a choral contractor familiar with good Bay Area singers. Or, since the concert was quite long, Canosa could have cut a work (Buxtehude’s peppy Ihr lieben Christen, freut euch nun concluding the program would be my choice), eliminated a rehearsal, and used the savings to pay for qualified singers.

The concert continued after intermission with Bach’s Cantata No. 131. Baritone Ray Martinez’s worn-down and uneven vocalism in his aria made a poor impression. Much better was tenor Corey Head, but even his sufficient resonance was marred by tuning problems. To his credit, he was unfazed by several mistakes by the continuo team and poor organ registration.

The music of Bach and Buxtehude was written for full-time professional singers earning 20 or more times the wage paid to a common laborer, so the music assumes a certain level of vocal competence. In fact, surviving payroll records indicate that singers in the Baroque era were usually paid more than instrumentalists. At Bach’s post in Weimar, the court singers were paid more even than Bach. Some of this music can be sung by enthusiastic amateur choirs that have earned, and deserve, a respected place in our musical culture.

The Marin Baroque’s repertory and the instrumental roster both overlap with the American Bach Soloists, which was founded in Marin County and maintains a robust concert series in Tiburon. To justify itself beyond hyperlocal pride, a new professional period instrument group should find a repertory niche or a compelling, unique interpretive hallmark. If Marin Baroque’s aspiration is to be a good volunteer community ensemble, it needs to make this clear in its promotion. To do otherwise is unfair to musicians who have reached a professional level — and to audiences that may not know what this music can actually sound like.