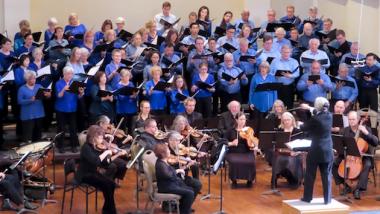 S.F. Bach Choir Gives Lift to the Mozart Requiem and a Forgotten Work

It would be news to report that Marianna Martines (1744–1812), one of the featured composers on San Francisco Bach Choir’s weekend concerts at Calvary Presbyterian Church in San Francisco and First Congregational Church in Berkeley, was neglected because she was a woman. But it wouldn’t really be true.

Martines was the protégé of Pietro Trapassi, aka Metastasio, one of the most influential poets of the 18th century and author of the most famous opera librettos of the century. Her composition teachers included some of Metastasio’s most famous colleagues, such as Johann Adolph Hasse, she was a strong performer on keyboard and a talented singer who performed before Empress Maria Theresa and counted Mozart among her musical buddies. She had major premieres in her lifetime, was praised by Italy’s most prominent teacher of counterpoint and composition, Giambattista Martini, and was the first woman ever admitted into the Accademia Filarmonica de Bologna.

No, the reason Martines is little-known today is more prosaic: All composers of the second half of the 18th Century not named Mozart, Haydn, or Beethoven are little-known today. To put it bluntly, they don’t put fannies in the seats. You might make exceptions for Antonio Salieri and Franz Xavier Süssmayr, not on account of their music but because they are connected with Mozart’s biography.

So it was not just brave, but also musically astute that SFBC’s director, Magen Solomon, put Martines and another Mozart colleague, Johann Christian Bach, on a concert anchored by Mozart’s (and Süssmayr’s) Requiem Mass. This was Mozart in the context of his time.

Martines’s Dixit Dominus (Psalm 109) is a large work, with full orchestra (including trumpets and kettledrums), chorus, and soloists. It’s not an undiscovered masterwork, but it is an imaginative and satisfying setting. Commonly, Martines’s music is called Italianate — which, of course it is, given that her teachers and patrons were masters of Italian opera and the Viennese court taste at the time leaned heavily toward the Italian style. And that style is simpler than Mozart’s style, which is enriched by things he learned from Parisians and German composers as well. But Martines’s vocal writing is simply beautiful, both for chorus and soloists, and the harmony of the “Juravit Dominum” movement (“The Lord has sworn”) is adventurous and refreshing and can easily stand comparisons with the Requiem. But the cool thing is that the next line (“You are a priest forever”) is set to a fugue that begins with a long, chantlike, monophonic melody, completely changing things up. And the next movement (“The Lord is at your right hand”) is in a dance rhythm, major key, with fantastic writing for the soloists.

Johann Christian Bach’s Magnificat, from 1760, shows us a composer who was definitely in the forefront of the then-modern style in church music. The contrasts that we hear in Mozart, and Martines, are being adumbrated by J.S. Bach’s youngest son. It’s an interesting work that needed a little more oomph from the chorus and orchestra in this performance.

Süssmayr had the unenviable task of finishing Mozart’s last masterwork after the great man had shuffled off this mortal coil. He did a decent job and has been rewarded by being endlessly criticized by musicians who think he botched it. Mozart didn’t help by offering historians a few choice words about his pupil in his letters. But the Requiem continues to be Mozart’s most commonly performed religious work, so maybe we should give poor old Franz Xavier a pass at this point. In this performance, the work came off well, with strong accents from the orchestra and commitment from the choir.

Solomon has really done well with the SFBC. The sound of the chorus is balanced and reasonably full, and the tonal quality is good, even at the top of singers’ registers. There were no obvious pitch problems and entrances and diction were clean. Sometimes you miss a little decisiveness and vocal energy. All in all, a chorus you’d be happy to hear more of.

The soloists (Rita Lilly, Heidi L. Waterman, Kyle Stegall, and Nicholas Nackley) were good: Stegall was the standout (and also sang a Martines concert aria beautifully) while Lilly’s voice was tonally dry. But she compensates with strong technique. The Jubilate Orchestra, with familiar faces at all the posts, played very well.

S.F. Bach Choir’s Spirited Mass in B Minor Verges on the Magnificent

With the appointment of Dr. Magen Solomon as its new Artistic Director last June, the San Francisco Bach Choir has entered a new era.

When George Frederick Handel gets the chorus revved up, a concert can get pretty exciting. San Francisco Bach Choir is hopping the Handel train in its upcoming concerts. Expect the rafters to ring.