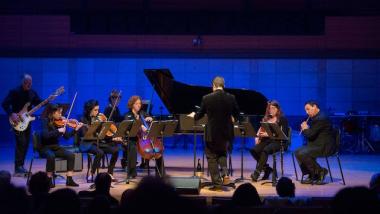 As Artistic Director Eric Dudley noted in spoken remarks and a program note, the concert focused on living composers who all have a connection to Ives. He cited Ives’s exploration of chromaticism, polytonality, and collage technique. The first work on the program, Marshall’s A Peaceable Kingdom, makes wonderful use of musical collage, layering a recording of a Yugoslavian funeral procession with music played by a live ensemble, and recordings of the found environment, such as church bells, birds, and, perhaps, a child’s voice.

A Peaceable Kingdom has a marvelous sweetness to it, and the funeral procession sounds very much like a New England village band playing a hymn, recorded on a 78 RPM record, which would certainly be Ivesian. The live ensemble, of 18 wind and string players, plus piano, plays in a counterpoint to the recorded band, which comes and goes in the course of the piece. The ensemble’s music includes string harmonics, winds playing a chorale-like passage, a quick obligato, and a slow-moving drone.

Turnage’s Slide Stride, modeled on stride piano playing, is a bouncy, charming essay for string quartet plus piano, full of string effects such as pizzicato and sliding. Deep it’s not, but it is a lot of fun to hear.

Timo Andres characterizes his Some Connecticut Gospel as “partly a piece about Charles Ives” and notes that the piece, written in 2008 before the presidential election, was also about his own new feelings in that time, perhaps of hope or patriotism. It’s based on a tune written when Ives himself would have been in college and on a ground that the piano plays. Some Connecticut Gospel includes lovely solos for viola, played by Meena Bhasin, and trombone, played wonderfully by SFCM student Katie Kearney. Flutist Tod Brody wowed everyone in a spectacular flute cadenza.

The Cage is a song by Ives, with the text also written by the composer:

A leopard went around his cage
from one side back to the other side;
he stopped only when the keeper came around with meat;
A boy who had been there three hours
began to wonder, “Is life anything like that?”

Hearne’s variations on the song, written for an ensemble of baritone, flute, clarinet, violin, cello, piano, and percussion, are quite Ivesian, and also refer back to John Cage, in that they are constructed from fragments of works written by other composers. This naturally incorporated a range of styles: the jazzy variation 5, the minimalist phasing of variation 9, the humming, breathing flute and violin solo of variation 4, which seemed to connect back to A Peaceable Kingdom.

Hearne himself performed the vocal part for the six variations, from a set of 12, and played piano for yet another arrangement of the song. He’s an appealing singer with a light baritone voice, and brought wry wit to each variation.

Hearne's website lists the other composers’ works and says that “Ideally in a live performance of ‘The Cage’ Variations, the movements are interspersed throughout a concert which also includes many or all of the above works.” For this concert, SFCMP included Molly Joyce’s Blue Swell, for solo violin and prerecorded material. Played with rapturous intensity by Hrabba Atladottir, Blue Swell is positively oceanic in its depth and surges, with the violin gradually overcome by the recording. You could easily hear the work’s connection to Hearne’s variation 4.

The program closed with Hearne’s By-By Huey, for flute, bass clarinet, violin, cello, percussion, and piano. Like many of Hearne’s works, it’s a response to the work of another artist, in this case a portrait by painter Robert Arneson of the young man who killed Huey Newton, co-founder of the Black Panthers. By-By Huey is a powerful and emotionally bifurcated work, moving from a violent opening to a serene coda for solo piano, in the space of just 10 minutes, perhaps embodying Newton’s life and death through the violence of his murderer.

In three works from the 1980s and ’90s, SFCMP shows Carter’s more genial side.

What Charles Ives Heard: A Guide to His Fourth Symphony

In the best-of-2017 sweepstakes, the San Francisco Symphony’s powerful rendition of Ives’s masterwork was a standout.