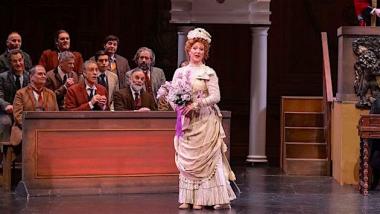 Another big production from the small company that could ... and did: San Francisco Lamplighters revived their hilarious homemade update of the early (1875) Gilbert and Sullivan Trial by Jury, adding their own 1997 sequel/spoof of Trial by Jury Duty.

The original, a 40-minute one-act musical, which needs a companion piece for a full show, was left pretty much intact, with its typical G&S ludicrous-hilarious plot about the injudicious hypocrisies of England’s 19th-century legal profession.

As the Learned Judge recalls the career leading to his exalted position:

All thieves who could my fees afford
Relied on my orations.
And many a burglar I’ve restored
To his friends and his relations.

Unlike the original, the brave spoof-on-top-of-barbs was updated and packed with contemporary references. Of the 1997 Lamplighters lyricists and rib-tickling authors, former Artistic Director Barbara Heroux, Music Director Baker Peeples, and Mike Dederian made their contributions again, after two decades-plus.

The production, seen on Sunday in Herbst Theater, was being recorded for yet another of the Lamplighters’ series of CDs — number twelve in a series, leaving only Utopia Limited as a future project to complete the entire G&S canon. Would that videos were less expensive to produce!

In Heroux’s direction, with Jackquelin Pedota’s costumes, supertitles (even footnotes added as needed), and the large cast in constant motion, this show was to be seen and heard.

Jennifer Ashworth’s bright voice once again filled the theater effortlessly as she emoted and vamped hilariously in the role of Angelina the Plaintiff, soon to win her case and the heart and hand of the Learned Judge, sung impressively by F. Lawrence Ewing.

Pity Edwin the Defendant, condemned by all from the beginning; Patrick Hagen carried on valiantly against all odds. Charles Martin’s stentorian Usher maintained a semblance of order in the courtroom.

The genius of the second act is that it provides a fascinating plot that both explains and expands the thin and brief G&S story, with surprises and fantastical revelations about the Judge, Angelina, and Edwin — all tangled up in grotesque and amusing relationships.

Musically, the second act is a gift to both experienced Savoyards and newcomers to G&S. It is a veritable digest from other Gilbert and Sullivan operas, each song applied appropriately to the situation in the story:

The three wards, of course, prance to “Three little maids” from The Mikado; Jane Eyrehead (Jennifer Mitchell) rephrases “Were I thy bride” from Yeomen of the Guard; there are songs with slightly modified lyrics from The Gondoliers, Iolanthe, Princess Ida, and even Trial by Jury.

Two important newcomers in the second act are Sonia Gariaeff, as the mad Victoria (hidden in the cursed East Wing), and Michael Grammer, who makes a stunning entrance as Mrs. Danville, the Housekeeper. The two join in a duet from Ruddygore, and Grammer brings the house down with “Oh, why am I moody and sad?” also from Ruddygore.

On top of it all, Alex Nite and Cole Sisser make up a “Visiting Russian Dance Troupe,” performing to the music of “Hornpipe” from Ruddygore. Yes, a DVD would be even better than a CD, so that scenes like this could be enjoyed in videos of whole productions.

The Lamplighters Musical Theater production of Candide has a lot going for it, along with a few unavoidable flaws.

All Eyes on Lamplighters' Iolanthe

The Lamplighters production of one of Gilbert & Sullivan's finest productions ever, Princess Ida, has no weak link, a properly lighthearted approach, brought out by hard work and great talent.