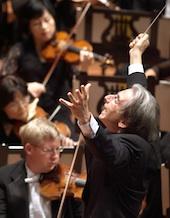 S.F. Symphony Reaches For the Stars With Adès Polaris

Thomas Adès continues to astonish. Sixteen years after the premiere of his audacious opera, Powder Her Face, the British composer remains a musical force to be reckoned with. Adès returned to Davies Symphony Hall on Thursday evening to unveil his latest work: with the first San Francisco Symphony performance of Polaris, contemporary music aficionados, once again, could only be dazzled by this remarkable musician’s bracingly distinctive compositional voice.

Thursday’s program, which repeats through Saturday night, made Adès’ work the arresting centerpiece of a program that also included Mozart’s Symphony No. 35 in D Major, “Haffner,” and Stravinsky’s Petrushka (there was more Stravinsky in the encore, too).  Conducted with tremendous verve by Music Director Michael Tilson Thomas, each work on the program came across splendidly. Still, Adès’ Polaris, which radiates light with all the shimmering power and mystery of its celestial namesake, emerged the evening’s high point.

Composed on commission from Tilson Thomas’s New World Symphony, which gave the work its world premiere at the Frank Gehry-designed New World Center in Miami earlier this year, Polaris runs only 15 minutes in length. Yet the score registers as a major triumph for the 40-year-old Adès (read an interview), who also maintains parallel careers as conductor and pianist (presented by Cal Performances, he’ll join the Los Angeles-based Calder Quartet on Oct. 2 at Hertz Hall in Berkeley).

Despite its compact running time, the score, subtitled “Voyage for Orchestra,” conjures an unmistakable sense of vastness. Polaris begins with an insinuating melody introduced by piano and circulated among five groups of brass instruments — trumpets, high horns, trombones, low horns, and tuba — playing in canon; the theme branches out into 12 pitches, but always returns, as if magnetized, to an anchor: a kind of musical Polaris, or North Star, around which other stars revolve.

The first section is stark, meditative; as woodwinds, harp, and percussion are folded in, the sound world becomes denser, fleeter, more enveloping. The music shimmers and undulates, suggesting water rippling, flowing, finally arriving in massive waves reaching a long shore. Throughout, Adès turns the original theme on its head, passing it around the orchestra, introducing weightier orchestrations, then thinning the texture in a return to the sound of piano and serene strings. The second section, augmented by mallet instruments, recalls the flavor of Balinese gamelan; the crashing chords of the finale suggest the destruction of a star — or perhaps the birth of a new one.

And Now for a Little Wolfgang and Igor

With Tilson Thomas leading an outsized performance, the Symphony gave Polaris a aptly lavish production. The five brass groups, playing with elegant precision, were arrayed on an upper tier behind the orchestra; three large screens suspended over the stage showed film by Adès’ collaborator, video artist Tal Rosner. Rosner’s images, alternating between black-and-white abstract designs and scenes of rugged seascapes — with two women gazing at the horizon line, walking the rocky beaches and gathering ropes of seaweed — matched the music for sheer beauty and elemental force. Below the screens, at the center of it all, was Tilson Thomas, summoning Adès’ brilliantly controlled chaos. All in all, it was a magnificent introduction to an irresistible new work.

Tilson Thomas launched the evening with a vibrant performance of the “Haffner” Symphony. The conductor imparted shapely structure and timbral allure to Mozart’s score — the opening Allegro con spirito sounded positively zippy, the strings taut and muscular — but what impressed most about this reading was the freshness of attack. The Andante’s plangent woodwinds, the lithe textures of the Menuetto, the dynamic interplay of the Finale, all came across with crispness and considerable brio.

After intermission, the orchestra turned to Petrushka. It’s always a pleasure to hear Tilson Thomas’s results with Stravinsky’s beguiling ballet score; even so, this performance was something special. The conductor savored the charming contrasts, brash spirit and endless invention in each of the score’s four scenes; as always, he illuminated Stravinsky’s complex rhythms and irregular phrases, applying dabs of color and shading with a masterful hand. The orchestra followed his lead with admirable focus, finesse and strong solo contributions from concertmaster Alexander Barantschik, flutist Timothy Day, bassoonist Steven Paulson, pianist Robin Sutherland, and trumpeter Mark Inouye.

If the ensemble was reluctant to leave Stravinsky, no one could have objected to the encore - a brisk, characterful traversal of Stravinsky’s Scherzo a la russe. Tilson Thomas announced it as one of his favorite encores. Judging by the response, the audience shared his view.