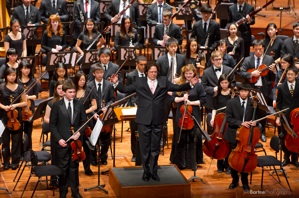 The San Francisco Symphony Youth Orchestra closed its 2012-2013 season on Sunday afternoon with an inspired concert that included interesting and meaningful juxtapositions: a Beethoven War Horse, two pieces from the 20th century that otherwise have nothing in common, and the West coast premiere of a composition by local composer Nathaniel Stookey (b. 1970).

Stookey has deep roots with the SFS Youth Orchestra, where he played violin and viola from 1986 through 1988, during which time, at age 17, he received his first commission from the San Francisco Symphony.

Stookey’s Mahlerwerk, which opened the SFSYO concert, was commissioned by the NDR Symphony Orchestra in Hamburg, for their Mahler Centennial in 2011. Stookey, however, didn’t use any of his own music to ‘compose’ it. Instead, he mined the nine finished Mahler symphonies for fragments that sounded most modern to him, and compiled them, initially electronically as audio samples, in order to create the score for a new piece.

Stookey used a similar process before, for a funeral march that he wrote for The Composer Is Dead, his new guide to the orchestra based on a text by famed San Francisco children’s book author Lemony Snicket. That funeral march consisted of direct and unaltered musical quotations, drawn from composers as dissimilar as Bach and Schoenberg.

The title Mahlerwerk, or rather Mahl/Er/Werk, is a play on the composer’s name, and the German word Mahlwerk (mill, grinder), which more or less describes the compositional process that Stookey uses here; he breaks Mahler’s compositions down into small chunks, but leaves them in the original key, tempo, and orchestration. When reworked, some of these fragments preserve their original ‘Mahler-ish’ mood and character, but others are put together in such a way that they create a completely new atmosphere or rhythm.

The result is not intended as a ‘Best of Mahler’ medley, or an attempt to create something that Mahler might have written himself, but rather as a mash-up of Mahler morsels, not particularly trying to convey anything specific about Mahler or his work, even though there are fleeting moments of recognition.

Maestro Donato Cabrera and his musicians, meanwhile, handled the score with inspiration and conviction.

Being relatively familiar with Mahler and his symphonies, and much less so with Stookey’s work, I had some trouble discovering Stookey’s voice behind the many reference points in the Mahler fragments. Perhaps by design, certain parts of Mahlerwerk do not feel as coherent as others. Some of the larger, more substantial Mahler quotes serve as structural markers, but there are also passages in Mahlerwerk that resemble a dissociated feverish dream with a chopped Mahler soundtrack.

Maestro Donato Cabrera and his musicians, meanwhile, handled the score with inspiration and conviction. Their recently issued CD, which features a brilliant version of Mahler’s First Symphony, recorded live (and in a single take) at the Berlin Philharmonie, proves that they know their way around Mahler’s musical language.

The Sunday afternoon concert at Davies Symphony Hall showed that the Youth Orchestra didn’t have any problems with any of the other composers on the program either, although Beethoven’s Fifth Symphony was a tough nut to crack.

Not only did Maestro Cabrera start the orchestra off in a hurry, catching at least a few musicians by surprise, but the Beethoven also seemed underprepared, suffering from a lack of transparency, articulation and general togetherness.

Understandable, given the competing rehearsal time required for Ligeti’s Atmosphères and Ravel’s Daphnis et Chloé, Suite no. 2, both challenging and labor-intensive scores. In a stroke of genius, Maestro Cabrera decided to play the two pieces back-to-back, without any pause or breathing room in between.

This way, the primordial sounds at the end of Ligeti’s shape-shifting soundscape not only transformed almost unnoticed into the babbling brooks that mark the beginning of Daphnis et Chloé, but it also retroactively changed Atmosphères from a gnarly collection of horror movie sound effects into a lengthy introduction to Ravel’s sumptuous score.

Daphnis et Chloé, Sunday’s concert finale, is really an ideal display case for the SFS Youth Orchestra — or any orchestra for that matter. It shows off the assets of every orchestra section and combination of instruments, with refined solo playing, sophisticated small chamber-music-like passages, and lush, organic impressionistic orchestral progressions.