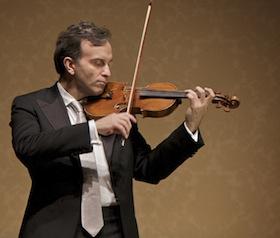 The stage at Dinkelspiel Auditorium was almost completely empty for the Stanford Lively Arts program on Sunday afternoon. It held just one man, one violin, one composer.

The man was Gil Shaham, the violin was his 1699 Stradivarius, and the composer was, of course, Johann Sebastian Bach. Many other Baroque composers wrote works for solo violin (the word unaccompanied is not preferred, because it sounds as if something’s missing). Bach’s six classics for the instrument, however, like Shakespeare’s plays, stand far above the work of even his most talented colleagues. Hunched over his violin as if were communing with it in private, Shaham played his selected three works with awesome fluency, and he played them in a canny order. The Partita No. 3 in E, perhaps the most sprightly and accommodating to lay listeners of the set, began the program, followed by the more abstract Sonata No. 3 in C. The drier Partita No. 2 in D Minor appropriately brought up the rear with its formidable concluding chaconne.

As with Shakespeare, what Bach provides performers is marks on paper. What they do with that is up to them. This is nowhere more starkly illustrated than in these solo works. There are no distractions, no other performers, not even 88 piano keys — nothing standing between the audience and the experience of pure musicianship.

What he’s trying for is a combination of fast-with-soul.

Preferences in performing these suites can be taken to two extremes: very fast, with virtuosity; or very slowly, with soul. Shaham is in the “very fast” camp. What he’s trying for, though, is a combination of fast-with-soul. As he put it in a shyly delivered talk at the opening of the concert, he thinks the music “swings better” when played at the quick, dancelike tempos and rhythms that the dance-form titles of the Partitas’ movements suggest. Bach scholars may blanch at this, as it’s commonly held that the references in the titles are nominal and that Bach wasn’t trying to write actual dance music. The proof, though, is in the playing.

View From on High

Listeners shouldn’t expect to get an Adagio or a Largo from Shaham, though those are the tempo markings of two of the Sonata’s movements. Clipping through these and other movements at speed gave listeners a bird’s-eye view of the music, emphasizing the phrasing and the broad harmonic movement over the patterns of individual notes. The speed also gave a strong hocket effect by which the notes on different strings were greatly disjunct, though Shaham generally avoided giving each string of his violin a distinct character. The opening of the Sonata’s Adagio, built on successive string entrances, sounded like chords gathering rather than voices chiming in.

He’s been playing these works for 30 years for himself, having an intimate, one-on-one conversation with Bach.

In the fast movements, the challenge with a speedy tempo is to avoid sounding mechanical. Shaham achieved the “swing” he mentioned in his talk with subtle techniques. His strategically placed pauses lasting mere nanoseconds and his tweakings of tempo included little catches at the 8th notes that interrupt the running 16ths in the Sonata’s closing Allegro assai, and graceful tumblings through the triplets of the D-minor Partita’s opening Allemande.

For the most part, he avoided overt emotional expressions, and he played exact repeats pretty much the same both times. Added ornamentation and a strong variety of tempo — slower, with more character — really broke out only in the repetitions in the gentle musette of the second Menuet of the E-major Partita and the tragic Sarabande of the D-minor Partita. In the latter Partita’s final movement, the massive chaconne, after an opening section on a fairly constant keel, Shaham hushed his tone notably for the beginnings of both the middle section in the major mode and the conclusion that returns to the minor. In the last section, he started displaying a bracing interest in making each tiny variation sound entirely distinct from its neighbors.

The sound of Shaham’s Strad was clean and biting, with transparent, organlike chords. The Bach solo works are consciously effortful, and Shaham let the strain show without being in any way overcome by it. The smooth tone he often employs in concertos would be completely inappropriate here, and we heard none of it. Nor was there any acoustical difficulty. (Dinkelspiel’s problems in this area are partly due to balance, so with a lone performer this was not an issue.)

As Shaham noted, his interpretations are not for everybody. To those used to other approaches, they could sound rather alarming. For all his speed, though, he was neither cold nor ritualistic. He’s been playing these works for 30 years for himself, having an intimate, one-on-one conversation with Bach. On Sunday, he invited a select and lucky audience to overhear that intimate conversation.