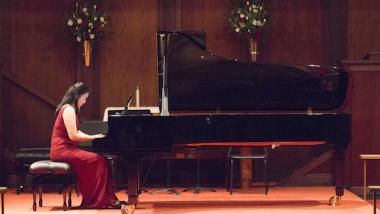 [email protected] is trying out a new format for its winter concerts. They’re called Focus Residencies. A Guest Curator chooses a topical theme, selects appropriate repertoire, and assigns performers. The resulting concert is preceded by a lecture on the theme.

The first Guest Curator is pianist Hyeyeon Park; her topic is the relationship between music and literature, specifically “Shakespeare and Goethe,” the title of the event. I missed Thursday’s talk by Audience Engagement Director Patrick Castillo, but Friday’s concert, at St. Bede’s Episcopal Church in Menlo Park, was worthwhile even with merely the more limited context of Castillo’s program notes. The program consisted of four 19th-century German works inspired by or relating to the writings of the two named authors.

With two of these pieces, the relationship was straightforward. Schubert’s first two masterpieces of song were settings of Goethe, Gretchen am Spinnrade and Erlkönig. They were not sung on Friday, however. Park played Liszt’s arrangements of both songs for piano alone. Her bright, shiny way with runs and figurations was not the ideal form of pianism for separating out the transcribed vocal lines from the rest of the piano part. For those familiar with the original songs, however, her jagged and somewhat unruly performance conveyed the anguish written in Goethe’s verses.

Something of the same unrefined style appeared as Park and Jon Kimura Parker played the piano four-hands version of the Nocturne and Scherzo from Mendelssohn’s incidental music to Shakespeare’s A Midsummer Night’s Dream. This was more expressive than precise. In two pieces of such contrasting character, there was much to be expressive with. The flavor of the play could be felt, and that was the intent.

For the two big chamber works of the concert, the relationship with literature was less explicit and much more allusive. Castillo’s argument, as he explained it to me, is that familiar literature created a cultural context in which composers and listeners alike could use the literature to affix their emotional connections to the music, either their ideas in writing it or their responses in listening to it.

Thus, when Beethoven’s disciple Carl Czerny first heard the great man’s Piano Trio in D Major, Op. 70, No. 1, the quiet and mysterious slow movement reminded him of the appearances of the ghost in Shakespeare’s Hamlet. Others must have endorsed Czerny’s response, for the work has been known as the “Ghost” Trio ever since. There are reports that Beethoven took the music from sketches for a witches’ chorus in an opera he’d been planning based on another Shakespeare play, Macbeth. Apparently, the Macbeth connection isn’t true; if it were, what we think of as a wild and windswept play would have become, in Beethoven’s hands, even more sedate and restrained than Verdi’s opera on it.

For while there were outbursts in this performance of the slow movement, for the most part violinist Cho-Liang Lin and cellist David Finckel put the movement’s repeating motive on a tentative and hesitant harmonic quest, while Park’s piano danced lightly around it. The music felt large and expansive. The hush of this movement was excellently framed by vivid and intense runs through the strong opening movement and the cheery finale.

Brahms’s music is often described as “autumnal,” but his Piano Quartet No. 3 in C Minor, Op. 60, is downright wintry, especially the despondent opening movement. This opens with hollow chords from the piano alternating with drooping figures in the strings, almost a parody of the exchanges beginning the slow movement of the “Ghost” Trio. The virtually suicidal feeling of the music, confirmed by remarks by Brahms, together with some more specific literary allusions by the composer, force a comparison to Goethe’s novel The Sorrows of Young Werther, the hugely influential cult literary classic of the Romantic era.

Lin and Finckel were joined here by Parker on piano — as curator, Park thought his heavier style would be appropriate for this work — and Matthew Lipman as violist. As the music began, they let Brahms’s score carry the emotional weight of the performance, playing in a calmer and more considered manner than in the first movement of the Beethoven. Gradually, as the movement went on, the intensity built up, and the following scherzo had a good share of ferocity.

Finckel brought distinct individuality to the long cello melody that opens the slow movement, playing notes in a detached manner with varying accents. Lin played with shifting facets, as if the music were being heard through the auditory equivalent of a flickering mirror. Lipman brought the depth and authority of a cello to his viola part, and Parker brought out the individual notes in his large chords. As the movement went on, it took on a relaxed, timeless quality outdoing even the expansiveness of Beethoven’s equivalent. The finale wrapped the show up neatly.

This was Menlo’s first concert at St. Bede’s, a church in the Sharon Heights neighborhood. The small sanctuary is almost square, with a low platform extending into the middle to perform on. This tends to diffuse the sound. But it’s compensated for by the interior being made almost entirely of wood. This keeps the music warm and rich and ensures that the sonority is never lost.

As a concert by itself, this was more a collection of good music than a seminar on music and literature. But the discussion of the literary roots of these works did add an enriching dimension to the experience. Menlo has scheduled another residency for next May, on folk influence on music for the unusual combination of two violins and viola. It too should be a well-cultivated event.

The power couple of chamber music played and breathe as one in this recital.

Schubert lived a tragic life, resulting in some dour music. But the third Schubertiade in [email protected] summer festival proved even the darkest music can be rewarding.