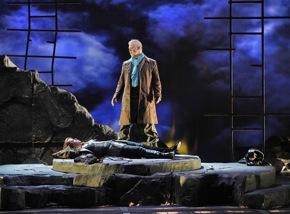 A split personality of an opera production is fine if the dominant part is filled with the important Good Things. That was the San Francisco Opera’s new Siegfried that opened Sunday afternoon.

The splendid features were the singing, the orchestra, the conducting by Donald Runnicles, and the best aspects of Francesca Zambello’s direction that more than compensated for elements of the Modern-Times-in-a-Desolate-America production that stretched to Make a Statement (Zambello’s Achilles’ heel).

Zambello’s best work focused on the crucial confrontations in Siegfried, searching out the dynamics of the relationships and interactions, building the final climax to the most powerful of these. This was, of course, Siegfried’s awakening of the sleeping Brünnhilde. That scene was launched by the beam of Nina Stemme’s voice, “Hail to you, Sun,” a powerful, exciting, and fresh sound at the four and a half hour mark.

The innocent, fearful Siegfried of Jay Hunter Morris warily circled her rock platform and bed, and the choreography of the encounter was magnetic. Stemme’s performance was stirring in peaks. The second one was Brünnhilde’s shocked realization that she was no longer a goddess but a mortal’s wife, then the final climax, the surrender to passion, and the culminating union.

The opera’s first great confrontation was Wotan’s appearance to Alberich, crossing a catwalk and climbing down into the deserted factory that fronts the dragon Fafner’s lair. Because Gordon Hawkins is as big and burly in voice and build as Mark Delavan, the Wotan, the pair are for once strikingly matched as alter-egos: the Light and Dark Wotans.

The Erda whom Wotan summoned for guidance emerged as a large presence, as sung by Ronnita Miller, earth-deep and grand in voice. They struggled for dominance, in effect husband and wife, he embracing and later all but throttling her in a physical relationship rarely depicted in this scene.

The Wotan–Siegfried face-off develops from genial meeting to a teenager’s offensively insulting his elder and to their explosive battle. This production makes clear that in Wotan’s aggressiveness that bars Siegfried’s way to Brünnhilde’s rock, he brings on the conflict himself, having already willed this to happen.

The earlier interaction between Siegfried and the Forest Bird is, I believe, an original touch in that she is not simply an offstage voice but appears on the catwalk, in the person of the comely, lithe Stacey Tappan, with flowing reddish hair. She wore a coral-colored frock coat and pants and sang in a sparkling high voice that captivated. She cocked her head and moved birdlike, conversing in pantomime and voice with Siegfried. It was utterly charming.

Morris sang a fine Siegfried, his voice focused and clear, softly burnished and, though not the strongest or most penetrating in the Heldentenor business, still consistently musical, expressive, and spirited. His Marine brush haircut and grizzly blond (or gray?) beard growth made him look more 40ish than the character’s 18 or so years. That and his dun-colored G.I. overcoat were among the poorer of the design ideas.

Delavan’s bass-baritone seems richer, darker, and larger than ever, and he sang commandingly, delivering a strong, dominating performance. He is also physically bigger, with his commodious outer coat heightening the impression. David Cangelosi’s bright, penetrating tenor projected the highly characterized singing of the Mime part well. Playing the troll, he compensates for his height by crouching and bending, and tumbled and hopped about acrobatically.

The orchestra played excellently under Runnicles’ sure and dramatic guidance, Wagner’s music portraying the story and unfolding in as eloquent and enveloping fashion as can be wanted. Altogether it was first class.

There was another touch possibly as rare as the personified Forest Bird. After Siegfried slays the dragon, the bass earlier only heard as the amplified voice tumbles out of the huge machine monster. In his undisguised “human” form of the giant, Fafner proceeds through his dying scene in Siegfried’s arms. It is Daniel Sumegi, his strong, resonant voice now unamplified.

The machine-monster “dragon,” with its cyclopean high-beam eye and great demolition claws in front, consists of an angular, solid “metal” construction about 25 feet high by 25 feet wide that was moved in through the rolled-open great “barn” doors at the rear of the abandoned factory. Earlier there, Alberich is discovered, looking like a derelict camping out with shopping cart and an oil drum, making Molotov cocktails and brandishing an automatic rifle. Lose it! (At least he wasn’t costumed as a Middle East terrorist.)

The first act of set designer Michael Yeargan finds Mime living out of an ancient house trailer: side open, stove and appurtenances to one side, the forge, bellows in a ramshackle rig to the other, images of a huge garbage dump at the rear, with utility towers and power lines overhead. In the third act, Brünnhilde’s rock is framed by outlined mountainsides, a strong image made more vivid by Jan Hartley’s projections and Marc McCullough’s lighting, the best visual aspects of the production.

The moving images of flames on the fore-screen, and the real flames upstage, followed wonderful moving clouds. Unfortunately, there was also a bad moment when, during the orchestral interlude portraying Siegfried’s travels to Brünnhilde’s mountain, the projections took us over a wasteland that appeared destroyed by a nuclear explosion. Another earlier moving-picture journey appeared to have been shot from a helicopter over Joplin, Missouri. The disaster there hadn’t happened when this production was assembled. Nobody needed this.