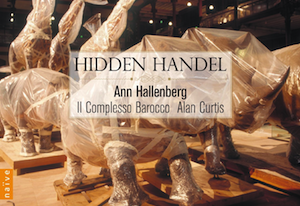 There are composers so prolific that there seems always some corner of their work that you just haven't gotten around to yet. You can be steeped in Bach, but still not know all the cantatas or all the organ music; you can be steeped in Haydn, and still not be able to say truthfully that you know all the piano sonatas, much less all the baryton trios.

With many great composers, it's in the operas that there is the most great-yet-unheard music. Haydn's and Schubert's operas are full of fantastic music, but your chances of seeing a stage work of either composer performed live anywhere nearby are slender. When it comes to Handel — well, a few of Handel's operas have some actual repertory presence, but for the most part they exist as things for conductors to put on disc and for singers to cull individual arias from.

Alan Curtis and his ensemble, Il Complesso Barocco, have spent a decade-plus recording previously unrecorded Handel operas, so their new disc, titled Hidden Handel, raises the question of just what counts as obscure Handel in this context. It's a question the disc answers in spades. The modern idea of an opera involves writing the opera, and then hiring the singers. The 18th-century idea of an opera generally involved hiring the singers, and then writing music suitable to them, possibly allowing room for the "portmanteau arias" (the favorite numbers congenial to their voices) that they brought along to be slotted in, however awkwardly, to the opera they were to perform in.

This disc is about the same business from the other end. The arias here — most never recorded before — are all tailored to particular singers. The music is unknown mostly because it belongs to works that aren't likely to be performed, or to revivals of works whose original score is likely enough privileged for being the "first version."

John Roberts' detailed and fascinating liner notes break it all down. Three arias here come from something that was originally an Alessandro Scarlatti opera, Pirro e Demetrio, a work that by the time Handel contributed to it had already been cut about six ways from Sunday and included a lot of music by one Nicola Haym. Another comes from Muzio Scevola, a composite opera for which Filippo Amadei, Giovanni Bononcini, and Handel each wrote one act.

And most of the rest belong to revivals of Handel's own operas. Today the idea of rewriting an operatic role to suit a new singer seems bizarre; in Handel's time, it was routine. New singer, new voice? You fix things. You write something new that shows off what the singer would most like shown off. And should she want to show off other things in a second revival, you write another aria. There's a terrific example here, of two arias written for Anastasia Robinson, both for revivals of the very successful Rinaldo. Between the first revival and the second, Robinson suffered a serious illness, and she seems to have emerged at the end of it with most of her upper range missing. So there was a replacement aria, to replace her previous replacement aria. They're each recorded here for the first time. They are utterly different, and both wonderful.

Some of the material here can't really be pinned down to particular operas at all, though Roberts does his best. "Sa perché pena il cor" (He knows why this heart suffers) survives in but a single source, and can't be tied to any production positively, though Roberts thinks it must have been meant for a revival of Teseo that never happened. It's one of the most striking pieces here, poignant and dark.

Interspersed among the arias are small instrumental pieces. You think of Handel's orchestral music as being generally known, but it isn't so; there are all sorts of little tidbits that aren't common currency. Indeed, though only one of the five short instrumental interludes here was billed as a first recording (a tiny march with a brave trumpet part), they were all new to me. (And all fun. The all-strings C-minor hornpipe is terrific, but then so are the two F-major numbers for winds and horns.)

Also new to me was mezzo-soprano Ann Hallenberg, who honestly deserves co-star billing here with Handel. Given a pile of music written for vastly different singers (or, as I said, for the same singer in different states of health), she sails through it all with a lustrous, glowing sound and also some of the nattiest passage-work I've ever heard from a singer. The program includes an aria definitely meant for a soprano, and another definitely meant for an alto. Hallenberg seems entirely at home in both realms. More of her, please.