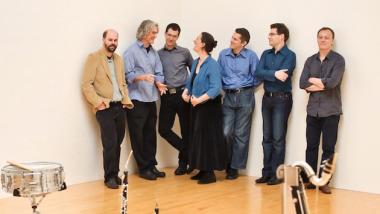 Space and Silence Are Key to the Musical Lexicon of sfSound

Long silences at concerts are often terribly awkward. Coughing, program-dropping, and weight-shifting become epidemics: People have to do something as long as nothing’s happening in the music.

sfSoundGroup doesn’t shy away from uncomfortably long silences, slow tempos, and almost imperceptibly quiet tones; for these qualities alone, they’re a group worth seeing. They take risks, and that pays off: Saturday’s program, at the Center for New Music (C4NM), was compellingly performed and deliciously slow.

There was one exception to the rule. After many minutes of playing at a glacial pace, the musicians took off in free improvisation, which was busy and cluttered. From there, the nine-person ensemble went directly into Tinnitus Insect Volume Knobs, a series of squealing high pitches created by sfSound clarinetist Matt Ingalls in conjunction with the whole group. Played against each other, these pitches create difference tones — artificially perceived additional tones that cause an intense ringing sensation in the ear. It was cool, until I needed earplugs; C4NM is too small for such a loud work.

Luckily, I didn’t totally miss out. In fact, Saturday’s program teemed with interesting harmonic explorations, starting with an excerpt (No. 7a) from Michael Pisaro’s harmony series. Pisaro, a Los Angeles-based composer, focuses on various aspects of harmony in this collection of works. This episodic movement layers long tones in slowly evolving chords. Because they’re punctuated by long silences, it feels impossible to directly relate any two clusters: They’re simply too far apart in time. Rather, you either revel in chords as they come, crunchy or cool in quality, or you get bored. I found the performance fascinating, especially as a way of being encouraged into the present moment.

Like Pisaro, Dan Joseph, in his Notes & Queries, explores periodicity and the slow unfolding of harmonic cycles. But if Pisaro’s work feels placid and eternal, Joseph’s, though also on the slower end of the spectrum, is considerably livelier, especially with the undercurrent of tremolo in the hammered dulcimer, which Joseph played.

A fundamental, three-note ascending figure, unfolding across the group at various speeds, frames the work, but in the middle of the piece, the ensemble repeatedly coalesces in pitch centers that come into focus so gradually, I didn’t realize it until everyone had arrived. The effect of this 2015 work (originally a quartet, and effectively arranged here for septet) is meditative, yet also warm and attention-grabbing; Joseph, who lives in New York, was a student of Pauline Oliveros, and it shows.

The cycles went on in Oliveros’s open-ended work Earth Ears. As each individual invents and repeats his own pattern, a characteristic texture should ostensibly emerge from the group as a whole, but when each player begins to incorporate the movement of another, the material quickly splits off, and it’s difficult to track any one idea. It’s like listening to a language you’ve taken for a year, trying to recognize phrases out of the speedy gibberish of native speech.

When ideas did pop out, it was gratifying to follow them from one instrument to next, transforming invariably as they went. Indistinguishably low notes in the bass clarinet became knocks against the body of the violin, dampened dulcimer hits, and foot stomps; flute flourishes improbably appeared in the bass. Many of the solos were interesting — Joseph quoted the opening motif from his own piece, in the same pitches, no less — and cellist Monica Scott’s gravelly pitch bending brought the piece to a satisfying end.

Modern and Moving From sfSound

New music collective sfSound comes to Old First Concerts this week. For all you adventurers out there who like an intellectual challenge, this is the antidote to the easy listening summer pops season you’ve been waiting for.

The cellist shows polish and musicality in new, experimental works.