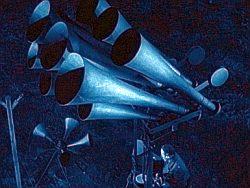 Jessica Balik on July 20, 2009
The contemporary chamber music concert that I attended Sunday evening was refreshingly free of gimmickry. For example, it took place in the ODC Dance Commons in San Francisco’s Mission District: a humble, but also accommodating, performance space. The program, by sfSound, also did not boast any flashy title or unifying theme. Nor was it accompanied by hollow reassurances about contemporary music’s being made palatable to the public.

Nonetheless, the music was palatable indeed. Like a five-course meal, this substantial concert included five main pieces, as well as one improvisation. Although they differed appreciably from one another, each piece stimulated, for its own unique reasons.

Opening the program was a short piece by the Austrian composer Olga Neuwirth. Fondamenta (1998) is a trio for bass clarinet, tenor and baritone saxophones, and cello. Even though this instrumental piece lacks any text, its subtitle reads, “Hommage à Joseph Brodsky.” A Russian poet, Brodsky is buried in Venice, where fondamenta denotes the road alongside a canal. While I cannot claim for certain that this connection explains the piece’s title, the allusion surely does seem apt. Just as Venice’s waters and solid structures meet in these fondamente, so too do these three throaty instruments merge within this piece. The resultant sonorities range from distinct to amorphous, from separate to composite.

Another trio occupied the center of the program. It was Hans Thomalla’s Lied (2008), a work for saxophone, vibraphone, and piano. Slow, soft, and subtle, a melody in the saxophone arises from a hazy bed of sustained, layered chords. The word Lied might imply a focus on this melody. Yet the interest of this piece, which is considerable, primarily concerns textural, rather than melodic, development. Tremolos in the piano and vibraphone, for example, penetrate the saxophone’s vibrato with varying degrees of consonance and dissonance. Thomalla himself notes that the piece seems simultaneously simple and complex. It also seems to me to be rich and deep, replete with an eerie, pensive beauty.

Sustained pitches also began Q (1996), a work by the American composer Alvin Lucier. Unlike Thomalla’s piece, though, no melody ever emerged from this initial harmonic mass, so that the mass alone commands attention. Lucier’s one-letter title might stand for “quintet,” because it includes an eclectic one of clarinet, trombone, violin, cello, and bass. These instruments play against two electronic wave oscillators that continuously drone a major second interval. As Lucier himself notes, the piece’s microtonal changes also create pulsing between the instruments and the electronic oscillators. Since these pulses vary in speed, Lucier’s infinitesimal fluctuations are both harmonic and rhythmic.

The program also included two compositions by performers within the concert. One was a group improvisation for six instruments that opened the program’s second half. The other was titled n + 1 (2009). This work, for clarinet, saxophone, viola, cello, and piano, is by the clarinetist and composer Matt Ingalls. The title probably refers to the fact that, throughout the piece, a given musical event is immediately followed by another just like it. It begins, for example, by growing organically from the preperformance tuning, with the clarinet and saxophone exchanging abrupt honks of the same pitch. Soon thereafter, a similar altercation ensues, this one with pizzicati between warring strings.

Finally, an older work by the well-known American composer Milton Babbitt closed the program. All Set (1957) is a piece for a mixed jazz ensemble. The title simultaneously evokes two different ideas: a jazz set, and the entirely fixed, or “all set,” ordering of serial composition. True to its name, All Set is indeed a jazzy, serial piece. Although serialism is often regarded as rigid and restricting, this piece reveals another, pliant, and accommodating side of this compositional technique.

Indeed, like Babbitt’s work, all five pieces on this program featured thought-provoking titles. Of course, this program did not emphasize such clever devices. Instead, its worthwhile music spoke for itself.