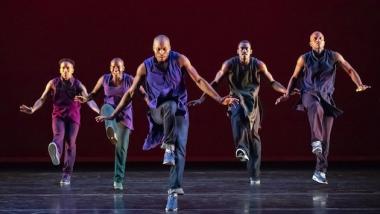 The Spirit of Alvin Ailey Rises and Dances in Lazarus

Lazarus, choreographer Rennie Harris’s tribute to Alvin Ailey, whose eponymous modern dance company opened its annual Cal Performances season Tuesday night, successfully breaks all the rules, if rules there be. Instead of a more customary season opener — a bright and inviting dance of welcome — the curtain rises on the grim and grievous spectacle of a young man dying and collapsing into his friend’s arms, surrounded by a community of slouching dancers, their steps united in tragedy. From those ashes, though, will come a new day, and therein lies a tribute to the gifts of the choreographer as well as the company bringing this engrossing creation to life.

But Lazarus is far more than a dirge. The work, which premiered in 2018 to mark the troupe’s 60th anniversary, is about the markers, worldly and spiritual, in Alvin Ailey’s life and work, the times that shaped him and his company. And ultimately, as its two acts progress and accelerate, it becomes clear that Lazarus, who rose from the dead, is Ailey. That adds hope to the darkness of the dance’s agonizing highlight reel of racism in America, including Bull Connor’s attack on the Freedom Riders with dogs and firehoses, and the assassinations of the Rev. Dr. Martin Luther King and other martyrs, as well as the subjugation of enslaved peoples throughout U.S. history.

The 15 dancers’ expressions of faith and resilience amidst despair include the raised arms of testimony, a faith that triggers the rhythmic footfalls, faster and faster; the twists of the torsos, the vigor of defiant leaps, the impeccable unity and esprit de corps, the sense of sorrow and salvation, heat and urgency. This is gorgeous, demanding work, continuing for a long and thrilling time.

Harris, whose own Philadelphia troupe, Rennie Harris Puremovement, is based in hip-hop but draws from many dance influences — Ailey’s included — set Lazarus to a panoply of sound arranged by composer Darrin Ross. Selections include Nina Simone’s “Feeling Good,” an audio of Ailey in a TV interview, and the song “Black Man in a White World.” It is in the ballet’s final seconds — spoiler alert here, if, as is devoutly to be hoped, you’re planning to see it — when, in the dimness, a big man in a suit leaps diagonally across the stage. “Mr. Ailey! Mr. Ailey!” a voice calls out. It’s a moment that can induce tears of joy laced with heartbreak.

After the hour-long Lazarus came the foregone conclusion, Ailey’s 1960 classic Revelations, which as always closed the show. Among the standout moments of traditional music and brilliant dance were Yannick Lebrun’s solo, “I Wanna Be Ready,” a miracle of grace, strength and balance; Jacqueline Green and Jamar Roberts in the duet, “Fix Me, Jesus,” with its unfolding extensions for her, the evocation of angels’ flights for both, and Michael Jackson Jr., Jermaine Terry, and Michael Francis McBride in the endlessly vigorous dashes and leaps of “Sinner Man.”

But it was the finale, “Rock-a My Soul, In the Bosom of Abraham” that launched the audience into a five-minute ovation and the full company into an encore, with a few dancers soloing exuberantly.

It was that kind of evening, beginning with a warm greeting from the Alvin Ailey American Dance Theater’s artistic director, Robert Battle, who has lifted up the dancers and energized the repertory, augmenting Ailey’s best works with current creations from other rising and established dancemakers. Battle noted the 50-year connection between the company and Cal Performances, now directed by Jeremy Geffen, formerly Carnegie Hall’s director of artistic planning. Battle joked that he welcomed the chance to commiserate with Geffen over the stress of running an arts organization. A night like Tuesday might help make it all worthwhile.

A celebratory crowd thrills to brilliant dancers evoking the full spectrum of the American experience.

Alvin Ailey Brings Down the House

The return of the Alvin Ailey American Dance Theater for its second engagement at Zellerbach Hall since Robert Battle took over the artistic directorship is, to judge from Tuesday’s opening, a rip-roaring audience success.