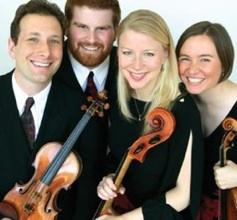 The Spirit of Call and Response

Back at home in its favorite concert venue, San Francisco’s Cypress String Quartet (CSQ) played its program “Call & Response 2012,” subtitled “The Masters: Tradition, Rebellion, and Innovation, Friday at Herbst Theatre. Now in its 13th year, “Call & Response” connects the “call” of traditional string quartet repertoire with modern-day composers who “respond” with a new piece for Cypress. Since its inception as a string quartet, Cypress has commissioned and premiered more than 30 new compositions, many through this series.

Enter French composer Philippe Hersant (b. 1948), the first non-American composer to receive a CSQ commission for this program. His “response” was supposed to refer to two heavyweight cornerstones of the string quartet repertoire: Haydn’s Opus 20, No. 1, and Beethoven’s Opus 127, both played with depth and understanding by Cypress (Cecily Ward and Tom Stone, violin; Ethan Filner, viola; and Jennifer Kloetzel, cello). Simply hearing the slow part of the second movement of Beethoven’s quartet made the evening.

Yet the focus of the concert was on the premiere of Hersant’s new work. His impressive musical resume includes more than 90 pieces, commissioned by organizations like the French Ministry of Culture, Radio France, Paris Opera, and the Orchestre Nationale de Lyon, as well as numerous awards and distinctions. Most important, the members of Cypress String Quartet were simply blown away by Hersant’s music.

“Philippe Hersant was an unexpected easy choice,” said Ward before the performance of the new Quatuor à Cordes No. 3. She also specifically mentioned how surprised and delighted the Quartet members were to have their parts delivered the old-fashioned way: as sheet music, neatly printed on beautiful paper, straight from the French publisher, rather than as a PDF attachment in their e-mail inboxes.

And that was not the only pleasant delivery of Hersant’s new piece. He has been described as a “tonal composer who is willing to turn music’s entire heritage, from Monteverdi to Janacek to Stockhausen, to his advantage,” and Cypress’ reading of his Third String Quartet (his previous two string quartets date from 1985 and 1988) somehow makes sense of that statement. Hersant’s music is full of contrasting moods that change abruptly, especially in the first movement (“Elégie”); it is almost like a series of highly evocative musical vignettes, though they do not all work equally well.

Hersant’s music is almost like a series of highly evocative musical vignettes.

The second and third movements (“Fantaisie” and “Rhapsodie”) show broader melodies and even a distant thematic echo from the British Isles. The music requires increasingly more energy and virtuosity on the part of the performers, who play none of their traditional roles in the quartet. It was sheer delight to see them in action, constantly focusing and refocusing their attention, picking up and passing off their melodies and lyrical passages to and from each other.

If Hersant’s piece disappointed in any respect, it was perhaps only because (as he himself admitted) his composition has no specific, obvious, or direct references to the Haydn and Beethoven quartets on the program, which is the original spirit of CSQ’s “Call & Response” program as I understand it. But then, who cares? I just hope we don’t have to wait another 20 years for one of Hersant’s string quartets.