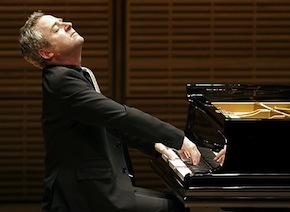 Stirring a Different Crowd at the S.F. Symphony

There’s an entirely different demographic at Davies Symphony Hall this week as the San Francisco Symphony brings back its famed American Mavericks series. Rather than hearing long-dead European composers, we had a mix of relatively recently deceased or still-alive American composers. As for the audience, middle-aged men, a lot of them with beards and dark-rimmed glasses, were disproportionally represented in the sparsely attended concert. It’s obvious that new music by obscure names is not the best for ticket revenue. But it should also be obvious that, for a nonprofit arts organization, ticket sales should not be the deciding factor in programming.

Although the audience was smaller than usual (though very respectable for a new-music concert on a Sunday afternoon), the energy buzzed with a strange, added intensity. This ilk of concertgoers didn’t come to be entertained: They came to be challenged, to expand their horizons, to keep up with strange new ideas. This wasn’t your grandmother’s lovely matinee chamber music recital.

Still in town after performing Henry Cowell’s Piano Concerto the previous night, Jeremy Denk stuck around to play selections from that composer’s solo piano pieces. He did a lot more to the piano than just “tickle the ivories.” Cowell calls on the performer to bang on the keys with the fists to create melodies consisting of clusters of pitches.

In one movement, titled “Exultation,” the left forearm plays huge accompanimental clusters while the right hand fingers a melody and then vice-versa. Denk also left the piano bench to pluck, rub, and strum the piano’s innards while his page turner held the sustain pedal. Gimmicks of extended technique aside, the collection of pieces was cute, mesmerizing, and in some cases even moving. Once the ear gets used to the “dissonance” of the clusters, they become perfectly acceptable tone colors. Accustomed to this pan-diatonic tonality, the last selection, “The Aeolian Harp,” was especially “beautiful” in the suddenly triadic sense of the word. Denk brought out the playfulness of the piece, and his signature grin smirked even more smugly than usual.

Slaking a Thirst for Novelty

For a truly unique experience, PARTCH, an eight-member ensemble that specializes in the music of Harry Partch and other new music, presented a semistaged collection of oddities by its namesake. Partch requires his own specialists, because he designed and built his own instruments. Featured in this concert: the mighty bass marimba, standing almost six feet tall to accommodate huge resonance chambers and requiring an elevated pedestal to play, which generated snappy percussiveness along with a woody grumble; the diamond marimba, which featured a multilevel array of bars mastered by Erin Barnes; a huge harp named Kithara (after the Greek instrument), which graced the stage along with an assemblage of “cloud chamber bowls” strung from beams; and something called a chromelodeon. These instruments were designed to explore finite variations of pitch — to not be limited by the 12-step incremental division of the octave used in most Western music.

At first this exploration sounds “out of tune,” but, as in Cowell’s clusters, the ear quickly adapts to accept the new construct of tonality. The apparent leader of the group, John Schneider, played a viola with an extended neck (over a foot long) gamba style, and then switched to an altered guitar, also with a strange neck and with strings spaced in three groups of two rather than an evenly spaced six. He played these instruments while narrating and singing Partch’s quirky scenes. San Francisco (1932) featured newspaper vendors yelling over each other: “Chronicle!” or “Examiner!” Remember that old rivalry? By the Rivers of Babylon featured a raspy viola performance accompanied by a parched-voice reading of that sad psalm. Barstow painted a tongue-in-cheek scene of hitchhikers lost in the West during the Great Depression; part sad, part funny, and plenty crazy, it made for a fun show. Throughout the selections, Partch’s mind-bending intonation gave the scenes a hazy, otherworldly feel.

The ear quickly adapts to accept the new construct of tonality.

After intermission, a quartet consisting of some of the Symphony’s finest musicians played Terry Riley’s first string quartet, G Song. For the entire piece, scales climbed up and down, chopped in various permutations and overlaid with more offset scales, and melodies created a gorgeous, 10-minute string fantasy. Originally composed for the Kronos Quartet, the piece is more classical-sounding than the more recent Kronos–Riley collaborations.

The Kronos legacy was also felt in the premiere of Morton Subotnick’s Jacob’s Room: Monodrama. Joan La Barbara was the sole vocalist (playing several roles) in what felt like a miniature opera. Although small in size and not too long, it had all the intensity of a full production. Peter Grunberg on the Kurzweil keyboard, along with a bustling string accompaniment by another quartet of Symphony members, provided for a stormy backdrop.

In an interesting staging choice, Jesse Stiles, the “music supervisor/electronics” operator with the faders and knobs, was sitting on stage with the musicians. Usually relegated to the back of the house and not given full credit, anyone who works with amplification and electronics knows how important this job is. This piece featured a balance favoring acoustic music, reserving the electronics for special points of articulation. The work was reminiscent of Steve Reich’s Different Trains and held many aspects beyond the Holocaust subject matter. Both pieces examine the sound of enunciated syllables beyond their meaning. And both feature stirring, amplified string parts that surround a lonely voice with a haunting restlessness.