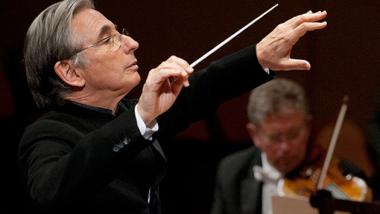 In a canny feat of programming, Michael Tilson Thomas and the San Francisco Symphony and Chorus made the improbable pay off. Crowding two Stravinsky choral works into the first half of the September 26-28 bill at Davies Hall proved to enlighten and illuminate rather than weary a listener with too much sacred singing at the front end of the evening. Once again, in a program that also included the composer’s Symphony in Three Movements, Stravinsky’s boundless invention and investment in the music of the past shone through.

The concert opened with the 1955 Canticum sacrum, a relative rarity performed only once before by this orchestra, 20 years ago at Grace Cathedral. Thomas recalled that event in brief remarks to the audience Thursday night. With its echoes of Monteverdi, Gesualdo, Schütz, and other composers of the early Baroque, the conductor noted, this work for tenor, baritone, chorus, and orchestra was meant to be heard in a reverberant space like Venice’s St. Mark’s Cathedral, where it premiered. In the concert hall acoustics of Davies, MTT added, the orchestration of Canticum might sound somewhat “spare.”

And so it did. But in a performance of pointillist precision that set off the vocal riches, that hardly seemed like a deficit. Everything came off with clarity and conviction, from the opening Dedication that featured the two soloists and trombones to the almost militant exaltation of the final chorus.

Tenor Nicholas Phan delivered a melismatic evocation of nature, enhanced by a meandering flute line. Baritone Tyler Duncan soared later on, in a deeply felt affirmation of belief grounded by plucked double basses. The chorus, fine and firm-voiced throughout, sounded especially lovely in the wide-span transverse intervals in the Charity section. “You shall love the Lord God with all your heart,” they sang, in urgent, clearly articulated Latin.

Brass fanfares, flourishes, and some doleful murmurs, elliptical as they were, summoned up an antiphonal majesty. An organ (played by Jonathan Dimmock) added atmosphere. The strings, even in a supporting role, made the most of their moments.

The high strings were missing altogether from the more familiar and distinctive Symphony of Psalms (composed in 1930, revised in 1948). As if challenging himself to make do without the violins and violas, Stravinsky fashioned a lushly reverent soundscape. The woodwinds conferred on intimate terms. A pair of pianos clattered happily. The chorus created mobile blocks of multipart harmonies. The swerves in mood and temperament, from rhythmic propulsion to a gently swooning Alleluia to a Zen-like continuo combo of timpani and harp, showed Stravinsky’s inimitable instinct for eventful, cohesive eclecticism.

MTT and his forces brought it all off splendidly. The texts drawn from three psalms came together in a multiroom musical architecture that never felt rigidly imposed. Harmonies shimmered translucently. There were spasms of ecstasy, murmurous meditations, and a positively seraphic tonic C-major chord to end it all.

Stravinsky got a breather after intermission, for Haydn’s Cello Concerto No. 2. Oliver Herbert was the soloist, and he was a knockout. His technical command, full-throated but never indulgent tone, crisp yet expressive phrasing, and tactful use of vibrato flowed together. The development section in the first movement had a sense of exploratory wonder, as did the bravura cadenza. Herbert found drama in something as simple as a four-step rise in the Adagio. If the Rondo lacked a measure of playfulness, the soloist made it dance. MTT and the band partnered respectfully, even deferentially.

Youthful but magisterial, with a tendency to audible breathing, Herbert cut a dramatic figure onstage. The audience adored him Thursday. A star, it seemed, was found and embraced.

If a little murkiness snuck in here and there, a slight sag in attentiveness, that was a minor misgiving about this smartly conceived and executed program.

Salonen’s “Faith” concert with the LA Phil celebrates the vitality of the composer’s final years.