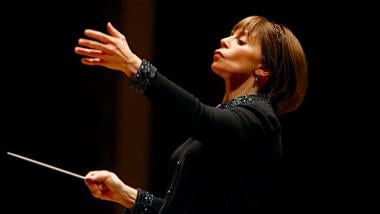 Symphony Silicon Valley sometimes needs the first program of the season to warm up and freshen its music-making after the summer break. That wasn’t the case at Saturday’s opening concert at San José’s California Theatre. This program of Barber, Prokofiev, and Sibelius was a splendid show from the beginning.

That could well be due to the immensely experienced and talented guest conductor, JoAnn Falletta. Not previously seen on a concert podium in San José since the days of the old San José Symphony last century, Falletta is best known locally for her decade at the helm of the Women’s Philharmonic in San Francisco, although that credit did not make it into her lengthy program book bio.

Nor did Falletta get to conduct any works by women composers on Saturday. At least she had some of the best from early 20th-century male composers to display.

An estimable performance of the Symphony No. 5 by Sibelius was particularly welcome, as its only previous performance by SSV laid an egg back in the orchestra’s early days. It shows how much difference a change in baton can make.

Under Falletta’s direction, the orchestra husbanded and expended energy dynamically, holding back occasionally before major climaxes but without much other tempo fluctuation. The wind choir had a tangy flavor, and the string passagework was crisp, especially in the violas. The string sections were layered finely, and the first violin section, 14 members strong, was particularly prominent, always coming through when it carried the melodic line.

The first appearance of the finale’s famous Swan Theme in the horns was smooth rather than commanding. Falletta kept the music flowing as it built up in power, in particular giving coherent phrasing to the sequence of separated dominant chords at the end of the symphony.

SSV’s publicity material for the concert describes the Fifth as “ardently traditional.” It’s actually far from traditional in its unusual harmonic procedures and the innovative form of the first movement, combining an opening Allegro with a Scherzo. What’s meant by calling the Fifth “traditional” is that it’s agreeable to listen to. What Sibelius proves is that it’s possible to be both original and pleasant at once, a combination more composers should take heed of.

The largest piece on the program was Falletta’s selection of nine movements from the orchestral suites from Prokofiev’s Romeo and Juliet ballet. A little more punch at the death of Tybalt is the only advice I could have offered to improve this interpretation. From the properly terrifying brass screams at the beginning of the opening “Montagues and Capulets,” this performance was fully committed. With the same crisp winds and the same beautifully layered string sound as in the Sibelius — this time with impressive solos from concertmaster Robin Mayforth, principal viola Patricia Whaley, and principal cello Evan Kahn, and a dramatically tuneful bit from the entire double bass section – the performance also had the same alternation between carefully parceling out and unleashing the sound. A few wobbly entrances did little to dent the intense vigor.

The concert began with the Overture to The School for Scandal, Samuel Barber’s translation of the satirical comedy of Richard Sheridan’s 18th-century British play into the language of 20th-century American music. Anyone who knows Barber only for the Adagio for Strings is in for a surprise with this bustling, chipper work. Playing it requires split-second coordination: With a minimum of stumbling, the orchestra made it through most impressively.